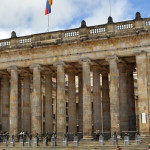 Colombia’s House of Representative on Tuesday passed legislation that will submit an eventual peace dealwith the country’s largest rebel group, the FARC, to a referendum vote by the electorate.

After passing both the Senate and the House, the legislation now awaits approval by the Constitutional Court and President Juan Manuel Santos.

Interior Minister Aurelio Iragorri signaled his approval following the passage of the bill, which he described to newspaper El Pais as “a mechanism to guarantee the greatest possible participation, in favor or against, in Colombian society in finishing the armed conflict.”

The bill would create a framework for government funded campaign financing in the event of an election, with guaranteeing funding for the support and opposition campaigns, as well as a controversial active “abstention” campaign.

Conservative Senator Hernán Andrade who defended the proposed funding for an abstention campaign to El Pais, said “In Colombia, we have an active abstention that especially applies to the referendums.”

Senator Armando Benedetti criticized the funding for the abstention campaign as waste of money. “We cannot create an incentive for people to get money so that people don’t vote. That is absurd and crazy.”

Electing the formation of a representative body to approve specific points of a potential peace deal rather than direct electorate elections, the FARC has publicly opposed the popular referendum passed by the Colombian Congress.

Delegates of the administration of President Juan Manuel Santos have been talking to rebel negotiators since November last year to come to a negotiated solution of Colombia’s nearly 50-year-old armed conflict.