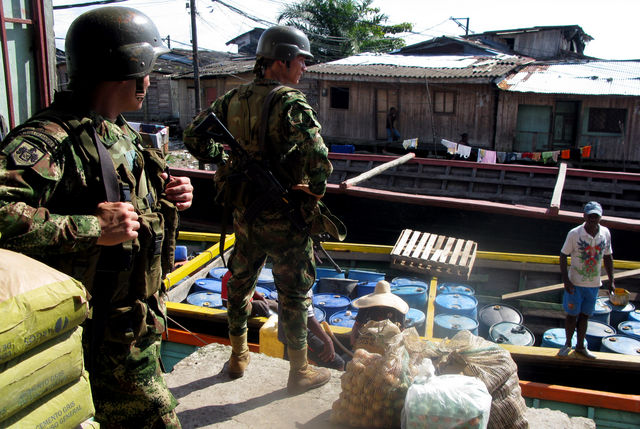 (Bloomberg News) – Colombia, once the largest supplier of cocaine worldwide, is cracking down on traffickers by thwarting theft of oil used to make the drug.

Police are destroying clandestine refineries where guerrillas and crime gangs process crude stolen from pipelines to use in cocaine production, said Lieutenant Colonel Hector Alvarez Yotagri, head of a police unit that tracks the practice.

“Each refinery is a big part of oil theft,” he said yesterday in a phone interview from central Colombia. “They still have rustic labs nearby. Going after the refineries diminishes their resources.”

Rebels have targeted pipelines to guarantee supplies of fuel needed for drug processing — and to show their military strength by more than quadrupling attacks on oil infrastructure as peace negotiations begin this month with the government. Rebels have used cocaine to fund an armed conflict dating to the 1960s in Colombia, South America’s third-largest oil supplier.

The stolen oil is heated in tanks, known locally as Martians, or marcianos in Spanish. The fuel is then poured over coca leaves, the main ingredient in cocaine.

Colombia is the third-largest producer of the narcotic after being overtaken by Peru and Bolivia, according to U.S. government estimates. Colombia produced 195 metric tons last year, U.S. Office of the National Drug Control Policy data show.

Police have destroyed 21 clandestine refineries, seized 53 Martians and about 226,000 gallons of stolen crude and fuel after beginning patrols in the second quarter along part of Ecopetrol SA (ECOPETL)’s Transandino pipeline in an isolated, mountainous stretch of southern Colombia, police statistics show. The 307 kilometer (191 mile) pipeline crosses through provinces that, according to United Nations’ estimates, have the nation’s largest illegal plantations of coca leaves.
Flying Saucers

Rebels pierce oil pipelines to attach valves and hoses that siphon oil into nearby collection pools carved into the earth. The Martian tanks, so-named because of a similarity in some cases to the shape of flying saucers, are used to create a gasoline substitute, which in turn is used to make a paste from coca leaves that’s later processed into cocaine.

While one kilogram (2.2 pounds) of the narcotic requires between 74 gallons to 86 gallons of gasoline to process, according to the UN, government controls have made it harder to steal or purchase the fuel, making pipelines a target for theft especially in isolated areas, Alvarez said. Colombia’s largest rebel group, the Revolutionary Armed Forces of Colombia, or FARC, steals crude and charges fees when others rob oil on their turf.
Thwarting Attacks

Most of that crude was stolen from the Transandino, police said, where patrols are starting to ease theft and help to thwart attacks. Sabotage of pipelines across Colombia quadrupled to 88 incidents in the first seven months of the year from 20 in the year earlier period. The assaults prompted Ecopetrol to cut its 2012 production target in July by 20,000 barrels a day to 780,000 barrels a day.

Ecopetrol, in an e-mailed statement, referred questions about security to the armed forces. Higher oil theft reflects increased controls on refined fuels and social and economic difficulties of some communities in southern Colombia, according to the e-mail.

Dana Coffield, president of Gran Tierra Energy Inc. (GTE) that uses the pipeline, said in an e-mail yesterday that the company doesn’t comment on installations it doesn’t own.
Production Losses

Theft may not decline as the first peace talks in a decade are scheduled to begin this month, since the FARC isn’t the only group that filches crude, said Diego Usme, an analyst at Bogota-based brokerage Ultrabursatiles SA.

“Robbery is far from being resolved by negotiations since there are a lot of actors involved,” Usme said Oct. 3 by phone. “It will have to do with increasing protection of the lines.”

The FARC may not want to loosen its hold on drugs, the group’s top source of financing, Michael Shifter, president of the Inter-American Dialogue in Washington, said last month. Talks in Oslo will include negotiations about trafficking, according to the government’s website.

And paying for your own fuel isn’t cheap. Brent crude has gained 13 percent in the past year.