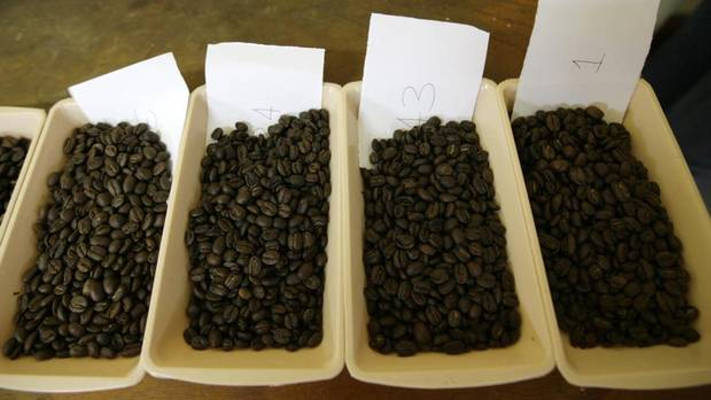 The idea of growing robusta at an annual coffee farmers’ conference this week in Colombia drew a hostile response from growers who fear it would tarnish the image of their premium produce.
(JOSE MIGUEL GOMEZ/REUTERS)

BOGOTA — (Reuters) Producers of Colombia’s prestigious arabica coffees, renowned as some of the world’s finest, have balked at proposals they consider growing cheaper, more astringent-tasting robusta beans to boost income and cope with a steep rise in costs.

President Juan Manuel Santos, once Colombia’s representative to the International Coffee Organization, mentioned the idea of growing robusta at an annual coffee farmers’ conference this week – and drew a hostile response from growers who fear it would tarnish the image of their premium produce.

“We are against robusta. It doesn’t need labour and is much cheaper on the international market … and doesn’t bring recognition for the quality of Colombian coffee,” Marcelo Salazar, who represents western Caldas province at the national coffee growers’ federation, told Reuters.

The idea would be to plant robusta on the largely desolate eastern plains where it could be harvested by machines rather than by hand, saving on wages that are one of the biggest costs farmers face on the steep inclines where arabica is grown.

But it became the most contentious topic at the three-day conference discussing how to make Colombian coffee more competitive and efficient, as producers fear it could cut the often-hefty premium their arabicas command internationally.

It could also detract from the value of the “100 per cent Colombian Coffee” label some roasters highlight proudly on their packaging.

New York-traded arabica futures sell at a premium over London-traded robusta, but the lower cost of producing the latter variety means it is sometimes more profitable, producers have said in Brazil, the world’s top coffee producer, which grows both varieties.

Former central bank board member Juan Jose Echavarria, head of a commission studying how to make Colombian coffee more competitive, set sparks flying when he spoke positively about the robusta idea in a speech on Thursday at the farmers’ conference.

“I don’t understand this reaction,” he said, after being heckled repeatedly by vexed audience members when arguing robusta could give Colombia access to another segment of the coffee market, create jobs and boost foreign currency inflows.

Echavarria told Reuters afterward that it was merely a proposal that would only be worth following up on if it could be shown that there was space for robusta production from Colombia in the global market.

Robusta trees produce coffee with a higher caffeine content than arabica. Caffeine is a natural pesticide that makes the trees particularly hardy and more disease resistant, and the variety is used in espresso blends to yield a foamier top.

Colombia could stand to benefit as a whole from the controversial proposal. But growers are likely to resist it fiercely since it would benefit the populations of the eastern Altillanura plains but bring little benefit to arabica growers who argue it would cheapen the image of Colombia’s exclusively arabica production.

The most high-profile panelist to voice doubt about the idea was the head of the International Coffee Organization, Roberio Oliveira Silva, who said it would make it less clear for consumers what they were buying when choosing Colombian beans.

“There are distinct types of coffees and Colombia has positioned itself for decades as a producer of arabicas of excellent quality. I would advise Colombia against making this move,” Silva said.

One of the major problems inflating Colombia’s costs, and discussed at length at the conference, is the lack of roads in rural areas and the poor condition of others where they exist. The government said it is investing 2.5 trillion pesos ($1.3-billion) to build or repair 23,500 km of minor roads nationwide.