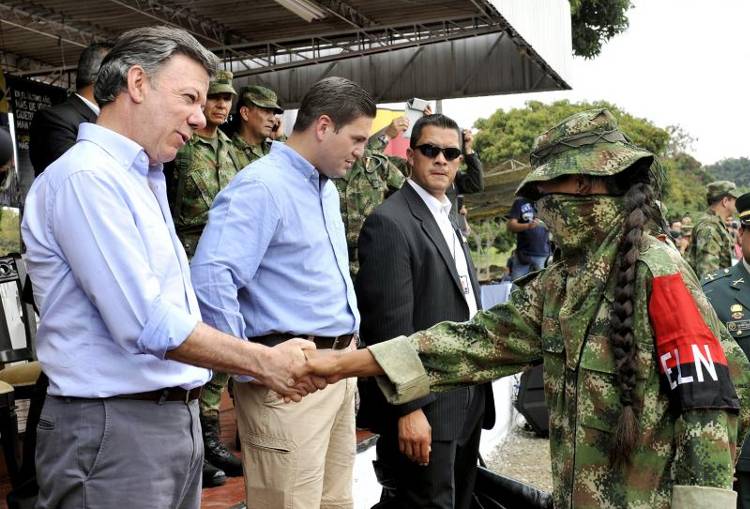 By Immanuel Wallerstein – There has been civil war in Colombia more or less continuously since 1948. It seems it may finally be coming to an end. It is ending the way most other long-lasting civil wars end. A changed geopolitical context combined with a deep sense of exhaustion on both sides is permitting an uncertain and imperfect compromise arrangement to prevail. This ending is comparable to similar endings in Northern Ireland and South Africa. It is what is not yet happening, and may not happen for quite a while yet, in Afghanistan, Syria, or Egypt.

Colombia’s civil war started with the assassination of the Liberal Party’s candidate for president, Jorge Eliecer Gaitán, who was thought likely to win the 1948 election. Colombia was at that time a largely agricultural, largely Catholic country. There were two mainstream political parties, the Colombian Liberal Party and the Colombian Conservative Party. The very names replicated a classic left-right split. They also reflected a classic split between freethinking and Catholic forces.

Over the next ten years, paramilitary forces linked to the two parties engaged in continuous fighting, particularly in rural areas, over control of the land. Captured soldiers were often killed in extremely cruel ways, especially by the Conservative party’s forces. It resulted in at least 200,000 deaths and came to be known as “La Violencia.” By 1958, the Conservatives had more or less won, and imposed a deal on the Liberals.

The restored calm did not last long.

By 1964, a Marxist-Leninist political movement emerged from within the relatively small Colombian Communist Party to begin guerilla action against the mainstream. It took the name of the Fuerzas Armadas Revolucionarias de Colombia, or FARC. The early 1960′s was a moment when similar movements were emerging in many Latin American countries.

FARC turned out to be one that was able to survive a long time, until today in fact. Its ups and downs were many. The important thing is that it transformed the civil war into one that revolved around more fundamental divisions than the initial Liberal-Conservative confrontation. Indeed, the emergence of FARC seemed to bring the Liberals into a de facto coalition with the Conservatives to oppose the guerillas.

In the 1960s, the United States considered FARC as the kind of force they were fighting across the world and gave military and political support to the Colombian government. With the collapse of the Soviet Union, the United States turned its attention to what they considered to be a war on drugs. Here too, Colombia turned out to be crucial as a production and transit point for drugs, particularly cocaine. And after 9/11 in 2001, the United States (and other Western countries) labeled FARC a “terrorist” organization.

There was one serious attempt to end the war politically.

In 1984 President Belisario Betancur entered into a pact with FARC, which allowed FARC to contest elections as the Unión Patriótica (UP). But so many of the UP’s active leaders were assassinated by ultra-rightist forces as well as by state agents that the FARC members returned to being active guerillas by 1986. This sabotage of the pact by the far right has weighed in all subsequent negotiations.

The Colombian president from 2002-2010, Álvaro Uribe, refused any idea of negotiations and launched maximal military actions against FARC, including crossing frontiers into neighboring countries when and where he thought FARC leaders were hiding. When his term ended, he was succeeded by his Minister of Defense, Juan Manuel Santos.

Former president Álvaro Uribe opposes the peace accord, but public opinion is no longer on his side.

Santos had been thought to be the hard-liner behind Uribe. He turned out to be the one willing to negotiate.

What changed for Santos was the geopolitical context. The United States was unable to provide the military attention it had previously offered because of its own geopolitical decline. Santos, who is undoubtedly one of the best friends of the United States in Latin America, was keenly aware of the rise of left and center-left forces in Latin America. He was most interested in preserving economic links to the United States and seemed to think that working within, rather than against, autonomous South American and Latin American structures, was most likely to give him the space for what was most important to him. He became receptive to offers by President Hugo Chávez of neighboring Venezuela and even Cuba to mediate. Negotiations seemed the better path.

Meanwhile, FARC was suffering not only from depletion of its strength but sheer fatigue, and suddenly became open once again to negotiations. These negotiations have been going on for some time now in Havana. And on November 6, President Santos announced on television that the government and FARC had agreed on the second point of the agenda for negotiation. The first point, on agrarian development, had been resolved in late May.

The second and crucial point was on disarmament and participation in electoral politics. Santos said that a “fundamental accord” had been achieved on this second point. He emphasized how Colombia would not now need another half century of civil war. The representative of FARC agreed. There still is a third point on narcotraffic, but no one seems to doubt that this will be resolved.

Opposition to the accord has already been verbalized loudly by former president Uribe. But public opinion is no longer on his side. Nor does it seem that there is any opposition to the arrangement forthcoming from the United States, which does not want to undermine the position of President Santos, its still very good friend. Nor are there any voices from the left, internally or internationally, likely to try to sabotage the accord.

How good a deal is this for Santos, still a conservative neoliberal, and for FARC, still a left force? It is too early to tell. But there seems a good chance that the pact will hold. The civil war is ending, in T.S. Eliot’s famous refrain, “not with a bang but a whimper.” But sixty-five years of civil war is exhausting. One wonders how many young people in Colombia would even recognize today the name of Jorge Eliecer Gaitán.

Immanuel Wallerstein is a senior research scholar in the department of sociology at Yale University and director emeritus of the Fernand Braudel Center at Binghamton University. He is also a resident researcher at the Maison des Sciences de l’Homme in Paris. His many books include The Modern World-System and Historical Capitalism. He lives in New Haven, Connecticut, and Paris, France.

The views expressed in this article are the author’s own and do not necessarily reflect QColombia’s editorial policy.

Immanuel Wallerstein is a senior research scholar in the department of sociology at Yale University and director emeritus of the Fernand Braudel Center at Binghamton University. He is also a resident researcher at the Maison des Sciences de l’Homme in Paris. His many books include The Modern World-System and Historical Capitalism. He lives in New Haven, Connecticut, and Paris, France.