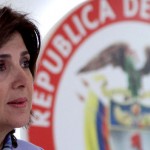 The Colombian government is preparing to implement new restrictions that would require residents of certain countries who already need visas to enter Colombia to also obtain transit visas prior to traveling to the country, according to a number of Colombian media sources.

Colombian Chancellor Maria Angela Holguin reportedly told C&M News that a decree “is not signed but is ready.”

“We’re studying the possibility of asking for a transit visa for citizens of some countries whom we already ask for a visa in order to enter Colombia,” she said.

The need for the measure arose after an ongoing incident with six Cuban would-be refugees exposed ambiguities in Colombia’s immigration policy. The Cubans, who have been granted safe-conduct and will have until Friday to submit a formal request for asylum in Colombia, have been held up in the El Dorado airport in Bogota for two weeks now after being deported from Ecuador.

The problem, explained Holguin, is that the six people in question “did not leave Cuba because they were persecuted” and therefore may not qualify for refugee or asylum status according to international standards. “We heard them saying that they went to Ecuador as tourists and, later, saying that they were looking for better alternatives in life,” said Holguin, who added that their cases would be studied in greater detail once a formal request was submitted.

The United Nations declined to intervene in the Cuban incident, but has encouraged Colombia to use the situation as an opportunity to analyze its immigration policy.

Holguin said the measure, which is designed to assure that “the refuge is not solicited by people who only have an economic interest,” will also serve the purpose of helping Colombia combat human trafficking, a growing problem in the country and around the world, by preventing Colombia from becoming a “stopover.”

“I think country must have policies that makes it more difficult for people to be used in this crime, which is terrible, because people end up in slavery and very denigrating conditions,” she said.

So far the decree is “still being studied,” but Holguin assured that in any event, the new requirements would only affect countries whose citizens already require visas to entry, and that in any case, the transit visas would be easy to obtain.