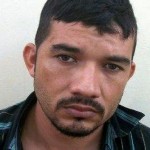 Oscar Mauricio Galvis had been on the run since escaping police custody during a daring raid last July.

Police caught up to Galvis in the state of Antioquia in central Colombia, where he was “tucked away in a house with a woman [and] a ‘five seven cop-killer (pistol)’ in his hand,” according to Colombia’s El Tiempo newspaper.

Galvis, a former paramilitary solider who police say has since risen to second in command of Medellin’s “Los Paisas” criminal organization, was first arrested in 2009, before being released a year later due to a procedural error.

His first recapture came in May of 2011, when he was injured in the midst of a firefight in a town outside the Antioquia capital, and Galvis, alias “El Pantera,” was convicted on a number of gang-related charges and sent to prison.

In July 2013, he was being transferred to another prison when the van carrying him was ambushed by members of “Los Paisas.”

After his most recent capture, Galvis may face new charges of prison escape, in addition to the four remaining years of his original seven-year sentence.

“El Pantera” is believed to have orchestrated the massacre of 11 people in March, 2011. Authorities also suspect that he sold weapons to the FARC’s 18th Front in exchange weapons for drugs, and coordinated the alliance between “Los Paisas” and the “Los Rastrojos” neo-paramilitary organization.