(Today Colombia) Authorities in Colombia disbanded what they are calling one the country’s biggest contraband medicine networks, providing a look into a highly profitable criminal industry that has resulted in a high death toll worldwide.

On July 27, Colombian police announced the arrest of 10 alleged members of a network that sold fake and adulterated medicinal products in the legal market, El Colombiano reported. Authorities say the network generated some $4 million, and was one of the biggest contraband organizations operating in the cities of Bogotá, Medellín and Cucuta.

Some of the illegal pharmaceuticals — which included treatments for HIV, cancer, brain tumors and anti-contraceptives — were made in clandestine factories using printing machines to clone legitimate brands. Others were expired goods whose sell-by date was modified, while more still were smuggled across the Colombia-Venezuela border and stored in inadequate conditions.

The network would sell the contraband medicine to local pharmacies via Facebook or online marketplaces such as Mercado Libre and OLX, according to authorities. It would also sell products through the national healthcare system.

During the operation, police seized 18,000 medicinal items as well as machinery that together was worth US$260,000.

The recent operation reveals the numerous ways criminal networks in Colombia traffic and profit off fake medicinal products. While it remains a relatively new criminal industry, counterfeit medicine has become a worldwide issue: more than one million people die each year from falsified drugs, according to Interpol.

In Colombia the problem is especially acute. Up to 10 percent of all pharmaceuticals are fake in Colombia, which Interpol ranks fourth in the world for the amount of counterfeit medicine. So far in 2016, Colombian police have seized nearly 1.6 million contraband medicine products worth an estimated $1 million. 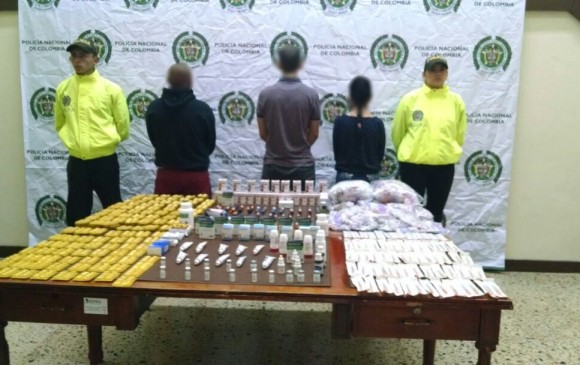 A key trading partner in this illegal business is Venezuela. The trafficking of counterfeit medicine between the two countries is a multi-million dollar industry, and involves authentic pharmaceuticals being smuggled into Colombia while falsely fabricated drugs move in the opposite direction into Venezuela.

This recent case suggests the illegal cross-border medicine trade continues despite the closure of the Venezuelan frontier nearly a year ago, which was intended to reduce contraband and other criminal activities. Venezuela’s political and economic crisis appears to be driving up criminal activity within that country, while the drastic fall in value of the bolívar currency is boosting profits for Colombian smugglers.