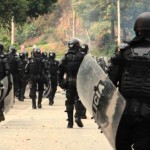 Two regional journalists covering a land eviction in central Colombia were attacked by anti-riot police (ESMAD), causing injuries and the “censure” of materials, according to a report released Thursday by the Foundation for Press Liberty (FLIP).

The alleged attack occurred on Wednesday at 5:00 p.m., when ESMAD agents began evicting residents in Villa Estadio, in the municipality of San Pedro, Sucre. The two journalists, Robert Romero, from local station Meridiano de Sucre, and his wife Yila Aguilera, who works for a local television station, were filming the the confrontation between community members and ESMAD.

“The situation started getting out of control and I told my wife to stop filming and to go seek refuge in a nearby house. A little bit later I returned to grab my camera and to take photos and the police launched rubber bullets at me, one hit me in the ear and the other in abdomen,”  said Romero.

Although Aguilera had taken refuge in the house, according to the journalists’ report, the police entered the building and beat the reporters.

“We shouted at them, ‘we’re journalists,’ and with rude words they responded ‘dogs don’t matter here neither do journalists’ and continued with the aggression. They beat us on the back, abdomen, arms and face,” said Romero. According to the journalists’ account, Yila lost consciousness resulting from repeated blows and the tear gas launched at the couple.

Following the beatings, the agent seized the video camera and two cell phones belonging to the journalists.

When the journalists appeared at the San Pedro police station to file a denouncement, they were reportedly verbally abused. Following repeated insistence, the police eventually returned the video camera and the two cell phones, although all material that had been recorded was erased.

FLIP condemned the attack, claiming the erasure constituted censure of the press, and according to Colombian law, a violation of the journalists’ right to perform their work.

In addition, FLIP indicated the event should be taken in context of widespread social protests last year, during which the organization recorded 44 instances of aggression against journalists covering the event, 14 involving ESMAD forces.

FLIP also pointed out the death, in November, 2012, of a journalist Guillermo Quiroz after falling out of a police truck in San Pedro. “Despite the fact that the institution announced intentions to launch a thorough investigation, 14 months later it has not been clearly established what happened, and no one is being held responsible.”

According to the El Espectador newspaper, Sucre Police commander Carlos Alberto said the police had “initiated an internal investigation and they would listen to both sides to see what had happened.”