Colombia Among The Places You’re Most Likely To Get Kidnapped

TODAY COLOMBIA via Vocativ.com – Kidnapping is booming. There are lots of reasons people avoid high-profile travel destinations—the flights are too long, the hotels are overpriced, the beaches are overrun with German men in skimpy swimwear.

But there’s another, sometimes overlooked criteria that you probably won’t find in your copy of Frommer’s or the Rough Guide: The likelihood of getting kidnapped at gunpoint.

Unless you’re the kind of person who heads to the swamps of Nigeria for a little R&R, it’s unlikely you’ve given much thought to the threat of kidnapping when planning your trips.

But kidnapping has boomed over the past decade, thanks to the growing socioeconomic divide around the globe and the spread of radical groups.

Public policy groups estimate there were more than 100,000 kidnappings around the world last year, including locals and foreigners.

To make sense of today’s kidnapping risk overseas, we’ve mapped out the places where you face the greatest danger of getting scooped up by rebels, terrorists or even garden-variety bank robbers. This isn’t simply a list of places with the highest kidnapping rates. That directory would include no-brainers like Syria (which has been fighting a bloody civil war for three years) and Afghanistan (which has become a haven for jihadists). We’re assuming you don’t need someone to tell you that those places are somewhat perilous for travelers.

Our list focuses, instead, on countries that are first and foremost popular travel destinations—and that also happen to have a high rate of abductions.

Kidnap rate: The kidnap threat in Colombia has improved significantly in the last 10 years, thanks to peace talks between the government and the rebels, the Revolutionary Armed Forces of Colombia (FARC), with just 219 incidents reported last year, according to Colombia’s Defense Ministry.

How the kidnaps typically play out: A majority of the kidnappings in tourist areas are “express,” usually lasting less than 48 hours. During these “quicknappings,” armed gangs force their victims to withdraw funds from one or more ATMs, sometimes using other proxies, such as cab drivers, to facilitate the kidnap.

What’s fueling the kidnaps: Economics. FARC, which has a history of kidnappings to raise money, last year called a stop to that practice as part of the peace process. It’s not uncommon for criminals to claim kidnappings or other actions in the FARC’s name.

The bottom line: While Colombia is no longer teeming with criminal gangs and narco-traffickers the way it was five years ago, it is still a volatile place. Risks remain for foreigners, more so for employees of international oil and mining companies than sightseers and vacation travelers. 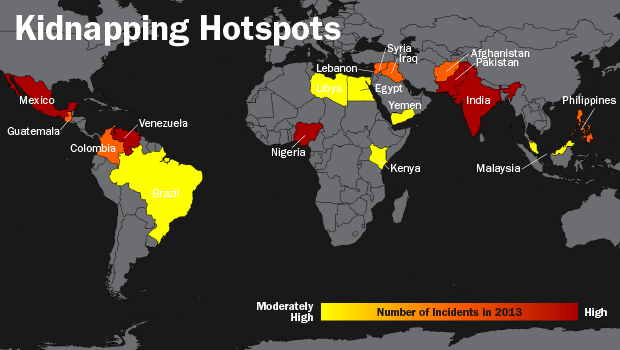 Other  you’re most likely to get kidnapped include: