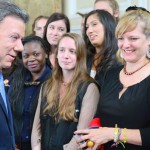 President Juan Manuel Santos said that Colombia aims to become a bilingual country, during a speech Monday in which he welcomed foreign volunteers who will be improving English education standards in the country.

“We want Colombia to be a bilingual country, this is one of our goals,” he said, in front of a crowd of volunteers.

Arriving from countries such as Canada, the United States, Australia and the United Kingdom, the 105 volunteers have agreed to spend a total of 40 hours over the next 20 weeks working in conjunction with Colombia’s National Training Service (SENA).

The goal of the program is to expose SENA students pursuing programs in Financial Services, Process Outsourcing Business, Hospitality and Tourism, Information Technology and Communications and Welding to firsthand experience with native English speakers. An estimated 5,000 students will directly benefit from the program, also geared to improve the standards of the teachers the volunteers will work alongside of.

Santos thanked the volunteers for helping to improve the language abilities of Colombians, one of the stated goals of his government, and also tried to frame the program in the context of Colombia’s ongoing peace process with the FARC rebel group, the country’s oldest.

“Being able to teach thousands of Colombians a second language, in this case English, is also to create peace,” he said, adding that the program “opens opportunities for many people to have better jobs, a better future.”

The volunteers signed up so far are professionals and recent graduates between the ages of 22 and 28. They will be distributed across three broad geographic areas and placed in SENA classrooms, where they will lead classes and assist English professors.