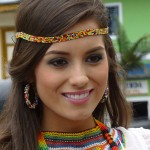 This year’s Miss Risaralda may have failed to become Miss Colombia in November, but that didn’t stop her from becoming the most beautiful woman in Latin America.

Maria Alejandra Lopez, an Industrial Engineering student from Pereira, beat all the competition Thursday when competing with other beauties from Latin America, the Caribbean and Spain.

The latest Miss Hispanoamerica comes with a pedigree; Her mother was Miss Marsella (a tiny town in Risaralda) in 1990. Risaralda’s current miss spent six years in Florida where, according to herself, she was the ugly duckling of her high school.

The representative from the coffee-growing Risaralda state in west Colombia failed to even end in the finals during the national beauty pageant last month, but that did not stop Lopez from trying it higher up the geographical ladder.

Lopez beat the representatives from the Dominican Republic and Venezuela to the honor in the finals of the pageant.

The Miss Hispanoamerica contest used to be called Miss South America, but changed its name and format in 2006 when the organization decided to include contestants from Spain and Central America.