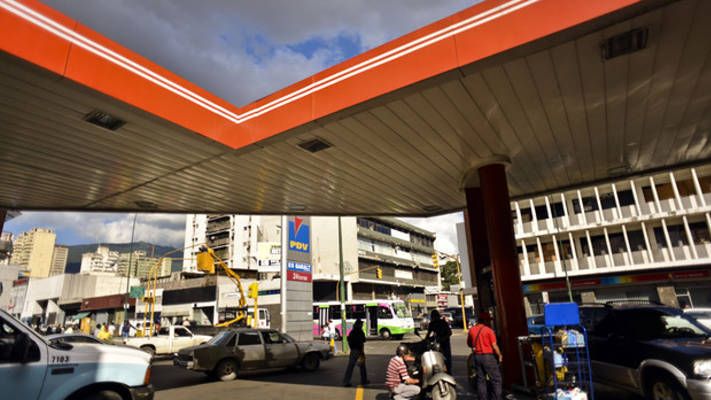 (Bloomberg) Criminal gangs are shipping the equivalent of 60 to 100 tanker trucks of subsidized Venezuelan fuel per day into Colombia, much of it paid for with cocaine, according to the Colombian government.

Between 10 percent and 15 percent of fuel used by Colombian drivers is smuggled from neighboring countries, Juan Ricardo Ortega, the head of the nation’s tax and customs agency DIAN, said in a Nov. 28 interview in Bogota. That’s led to a slump in fuel duties collected by the government and a warning to BHP Billiton Ltd. (BHP), Anglo American Plc. (AAL) and Glencore Xstrata Plc. (GLEN)’s Cerrejon coal complex over the source of fuel for its trucks. Cerrejon said it’s investigating the situation.

Tankers are loading up on gasoline and diesel purchased near the border in Venezuela’s Zulia state for about one cent a gallon and driving into Colombia abetted by corrupt government officials and local politicians, according to Ortega. The Colombian state has “zero control” over the border province of La Guajira in the northeast of the country, which has a centuries-old smuggling tradition, Ortega said.

From the Colombian border towns, the contraband fuel is distributed to cities along the Caribbean coast and to Bogota about 500 miles away, often mixed with legal fuel, Ortega said. Smuggled fuel is also brought in over other parts of the roughly 1,300-mile (2,100 kilometer) border, carried in cars and trucks and loaded onto mules.

Ortega, 46, a Yale-educated economist whose father was Colombia’s central bank governor, said his efforts to shut down La Guajira smuggling routes have been thwarted by unrest in the local population, many of whom earn a living from contraband food, liquor and fuel.

“We’ve tried three times to close the border, and it isn’t difficult – you put boots on the ground and trucks can’t get past,” he said. “But the people at the border start to rise up. They burn police stations, they plant bombs, they burn customs warehouses.”
‘Set Up’

The Governor of La Guajira, Juan Francisco Gomez, was arrested in October and accused of conspiracy to commit crimes and involvement in three homicides. Alfredo Montenegro, a lawyer for Gomez, says his client pleaded innocent.

“The press say he’s linked to organized crime, a sort of Pablo Escobar,” Montenegro said in a Nov. 29 telephone interview, citing a Colombian drug boss killed in 1993. “But he’s being set up.”

Three of the past five governors of La Guajira have been forced to leave their posts before finishing their mandate, according to the Mision de Observacion Electoral, a Bogota-based pro-transparency group, and Corporacion Nuevo Arco Iris, a think tank that monitors Colombia’s conflict.

A crackdown on money laundering by Colombian banks means some cocaine-smuggling groups prefer payment in gasoline rather than cash, which they sell at gas stations that they control, Ortega said.
Fuel Taxes

Gasoline costs about 6 U.S. cents a gallon at the official exchange rate in Caracas, the cheapest in the world, and about 1 cent per gallon at the black market rate. That compares with about $4.30 in Bogota and an average of $3.27 in the U.S. About 70 percent to 80 percent of the roughly one million gallons of gasoline smuggled into Colombia every day comes from Venezuela, and most of the rest from Ecuador, according to Ortega.

Fuel tax collected by Colombia’s government fell 16 percent this year, even as auto use increases in line with economic growth, according to Ortega. The economy expanded 4.2 percent in the second quarter from a year earlier, compared with 3.3 percent in Brazil and 1.6 percent in Mexico, Latin America’s two biggest economies.
Cerrejon Alerted

The border region is also home to Cerrejon, Colombia’s largest coal mine, jointly owned by BHP Billiton, Anglo American and Glencore Xstrata. Ortega said he alerted Cerrejon that one of its contractors was buying smuggled gasoline.

Cerrejon itself is paying full price for its fuel, and isn’t profiting from the trade, the operating company said in an e-mailed response to questions. The mine has opened an internal investigation after being made aware of the matter by the DIAN, it said. The three owners referred questions to Cerrejon.

“The criminal gangs are getting stronger,” Colombia’s Mines and Energy Minister Amylkar Acosta, who’s from La Guajira, said in a Nov. 18 interview in Bogota. “Contraband, like drug trafficking, has become the fuel of these gangs. As long as the difference between the price there and the price here is so large, there will always be an incentive for contraband.”