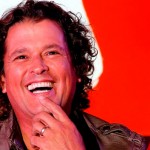 Coca-Cola launched its 2014 FIFA World Cup anthem “The World Is Ours” in Bogota on Monday, featuring Colombian artist Carlos Vives.

The soft drink giants released their anthem for the 2014 FIFA World Cup, which will be held in Brazil starting in June, during a launch in Bogota attended by its three collaborating singers: Colombian vallenato legend Carlos Vives, X-Factor USA finalist David Correy, and Brazilian artist Gaby Amarantos.

“Of course all the strength of the music comes from Brazil, who this year will host the World Cup, but it also has a very Colombian flavor,” Vives said at the launch. “I think we were able to make the three artists essential for the song.”

The Brazilian beats are central to the song, which remains true to the South American spirit of this year’s tournament, though its lyrics have influences from each of its contributing artists.

As explained the organizers of the launch, the objective of the song is to emphasize the power the international football tournament has in uniting people and bringing them joy.

The song, which will be featured in Coca Cola’s worldwide ad campaign in the coming months and during the tournament, was produced by Andres Castro, eight-time Grammy Award winner.