Clashes between guerrillas and neo-paramilitaries in northwest Colombia displace 1000 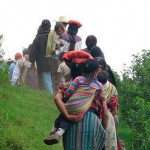 Clashes between leftist rebel group ELN and neo-paramilitary group Urabeños have forced some 1,000 residents from the northwest of Colombia to flee their homes, the Ombudsman said Thursday.

According to the governmental human rights agency, the mass displacement occurred in the municipalities of Apartado, Antioquia and Alto Baudo, Choco.

The Ombudsman said that the sporadic clashes between the two rival groups began on November 28 and are ongoing.

All displaced are members of Afrocolombian communities from the remote regions.

According to the Ombudsman’s Office, the fighting is impeding locals that stayed behind to harvest or fish, and forcing them to sleep under their mattresses to avoid being hit by bullets.

The clashes between the left-wing guerrillas and originally right-wing neo-paramilitaries are not the first; In late November a local NGO reported mass displacement in the municipality of Zaragoza, some 150 miles east of Apartado, after clashes between the Urabeños and the country’s largest rebel group, the FARC.

The ELN is the country’s second largest rebel group, which joined forced with the FARC in the northwest of the country where both groups have interests in illegal mining and drug trafficking.

The Urabeños were formed by members of the officially demobilized paramilitary organization AUC, originally formed to fight the leftist rebel groups active in Colombia since 1964. The neo-paramilitary group has grown to become Colombia’s largest drug trafficking organization.

Locations of the displacement