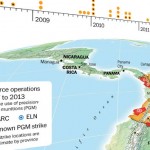 Following a publication in the Washington Post, opposition politicians in Colombia interrupted their Christmas break  to demand clarity over the role of US intelligence agency CIA in the country’s armed conflict.

The report released on Saturday claimed that a covert CIA action program has helped Colombia’s armed forces kill more than two dozen leaders of rebel groups FARC and ELN and was based on numerous testimonies by US officials.

The revelations sparked a discussion about how far US military influence should be allowed.

Representative Ivan Cepeda and Senator Jorge Robledo from the leftist Polo Democratico party called on the government to clarify the US involvement in Colombia’s armed conflict.

“[The government] must inform the public about the CIA’s and other US agencies’ intervention in Colombia’s armed conflict. Now it’s necessary to know what range this interventions had, under which terms it was implemented and if it eventually included some kind of espionage operation,” Cepeda was quoted as saying by newspaper El Espectador.

Robledo demanded a bilateral agreement to legalize US military presence on Colombian soil.

Senator Alexandra Moreno (MIRA), a member of the congressional committee in charge of national security and international agreements, stressed that this kind of secret foreign interference would not go against any kind of constitutional law.

Former president Andres Pastrana, who paved the way for military cooperation between the two states in the late 1990s, stated that US support for the war on drugs was extremely valuable when it came to planning large-scale military operations.

Defense Minister Juan Carlos Pinzon made an effort to put the discussion into perspective, claiming that “the truth is that everybody knows that we have a strong collaboration with the US, this is nothing new.”

Pinzon stressed the importance of US military aid, claiming that the soldiers carrying out the “most important and most spectacular missions,” were Colombian, while newspaper El Tiempo quoted a high level armed forces source claiming that the US military support played “a crucial role” in all major air strikes against the country’s oldest rebel group FARC in the past years.

According to newspaper El Espectador, the revelations are expected to have an impact on the ongoing peace talks between Colombia’s government and rebel group FARC as the organization’s involvement in drug trafficking is the current agenda’s point under discussion.

The FARC did not seem impressed however. On its Twitter, the guerrillas implied the Washington Post revealed nothing the FARC didn’t already know.