A “chiva” public transport bus went over a cliff early Monday morning, leaving at least 12 dead and 35 injured in the Cauca region near Cali, according to local police announcements. 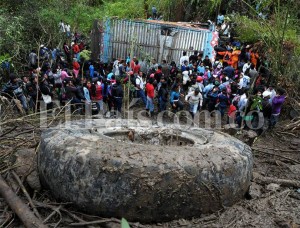 The bus was traveling on a mountainous road from the Jambalo municipality to Toribio carrying more than 40 passengers — most of them indigenous Colombians — when it fell nearly 300 ft to the ground below.

“The bus just left Jambalo with at least 45 persons on it; most of them were indigenous people that were celebrating a festival around here for the long weekend,” the mayor of Jambalo told Colombian newspaper El Pais.

Local police have yet to confirm the final number of dead and wounded as rescue operations are still underway. Emergency responders have had difficulty so far because of bad weather and road conditions.

“There are teams from Toribio and Jambalo on the way, trying to promote the rescue operations. We are waiting for better weather conditions to investigate the scene by air and decide how to proceed,” the local police commander commented to El Pais.

Some of the wounded passengers, however, have reportedly been brought to nearby hospitals already.

The cause of the accident has not been determined yet, but this is the third accident involving the traditional Colombian ‘chivas’ buses this weekend.

The first one happened on Saturday, and left four dead and more than 25 wounded; the second occurred early Sunday morning, with an additional four deaths and another 30 injured passengers.

The ‘chivas’ buses are somewhat iconic in popular Colombian culture, and many are converted into tour and “party” buses inside major Colombian cities. The buses are generally old, though, and calls have been made in certain cities, such as Medellin, to replace them with newer models.