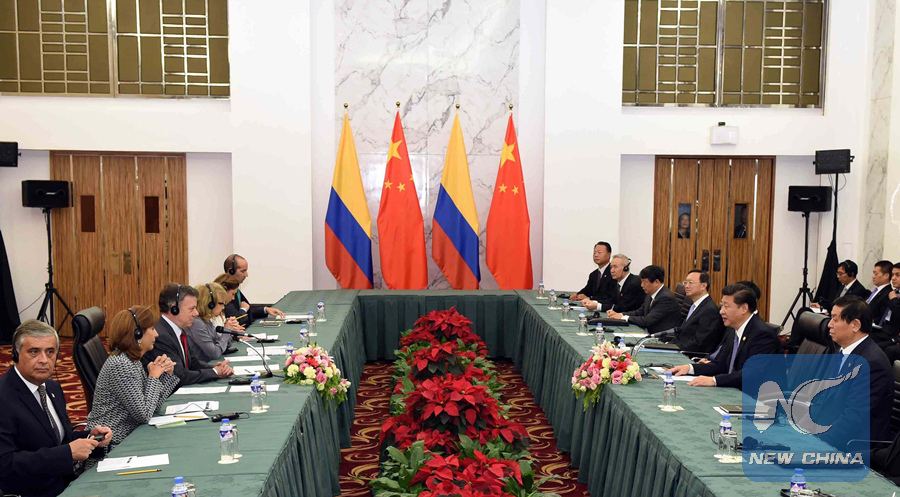 TODAY COLOMBIA – China and Colombia on Wednesday pledged to cement their friendship and deepen bilateral cooperation in a host of areas.

The consensus came as Chinese President Xi Jinping met with his Colombian counterpart, Juan Manuel Santos, in the Philippine capital prior to the opening of an Asia-Pacific Economic Cooperation summit scheduled for Wednesday and Thursday.

China, Xi said, attaches great importance to its relations with Colombia and stands ready to work with the South American country to further promote bilateral relations.

Noting that this year marks the 35th anniversary of bilateral diplomatic relations, the Chinese president called upon the two counties to take the occasion as a starting point and lift their ties to a higher level.

Xi urged the two countries to tap into their potential and seek new sources of growth so as to maintain the momentum of bilateral trade.

In addition, the Chinese president said his country is pleased with the significant progress Colombia has achieved in its domestic peace process.

For his part, Santos said his country is ready to work with China to consolidate their friendly relations.

Noting that China is an important trading partner of Colombia, Santos called on the two counties to enlarge their cooperation in various fields, including infrastructure construction and agriculture.

The Colombian president added that his country is willing to strengthen coordination with China in international and regional affairs and looks forward to China — a permanent member of the UN Security Council — helping with Colombia’s peace process.