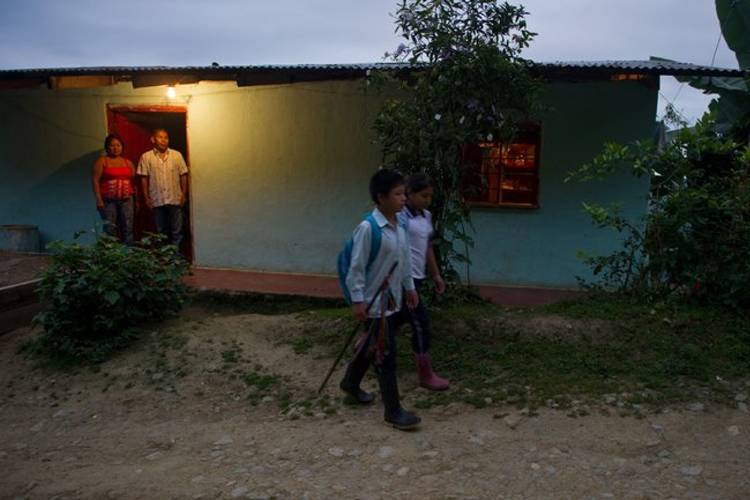 Luis Robayo/Agence France-Presse – Getty Images
Children in a Colombian village walking to school. Often students may miss school for months at a time while they work to contribute to a family’s income or for other family reasons.

Myriam Mazzo is a teacher in the central Colombian city of Armenia, a rural town of about 300,000 people nestled in the mountains southwest of Bogotá. In her school’s single classroom, she teaches children of various ages and grade levels who work in small groups at their own pace. Rather than standing by a blackboard at the front of the class, Ms. Mazzo moves among them, serving as a guide more than an instructor.

Using this method, she has taught generations of children, the sons and daughters of local farmers and coffee growers, to read, write and do math. Her primary school students are often among the first in their families ever to have set foot in a classroom.

Ms. Mazzo has used this method of teaching, known as Escuela Nueva or “New School,” for 28 years after experience teaching in a traditional public school in Colombia. The method, developed by Clara Victoria (Vicky) Colbert de Arboleda in the 1970s, was designed specifically for teachers like Ms. Mazzo, teaching multiple grade levels in one classroom in rural communities.

Ms. Colbert comes from a prominent Colombian family with a tradition of educational activism. Her mother founded teacher training colleges and was a “forward looking educator,” she said in an interview, while her godfather was a former Colombian education minister.

“At Stanford, I was exposed to such wonderful theories and learning, so when I came back, I wanted to tackle basic education and work with the poorest of the poor schools, the isolated schools,” she said.

Returning to Colombia, she began to work with the Ministry of Education in the mid-1970s as a coordinator with rural schools across the country.

Often teachers in those schools have students who miss school for months at a time, to work or for family reasons.

“With Escuela Nueva, the student is a leader, no longer the shy kid in a traditional classroom,” Ms. Mazzo said in a telephone interview. “He’s not the one afraid to speak or share ideas, he is participative, democratic, knows how to share and work in teams, and — most importantly — he can work at his own pace, so he is motivated to come back after long absences.”

Inadequate resources and low academic achievement usually lead to high dropout and repetition rates in traditional schools. In the Quindío region of Colombia, around Armenia, for example, students must overcome not only poverty and a lack of educational resources but also a culture that encourages children to work to contribute to a family’s income — and the lure of easy money to be made from dealing drugs.

Escuela Nueva’s flexible program encourages dropout students to come back to school to study at their own pace and to take exams when they are ready.

“If a student learns faster, I can guide him and he can go even faster; and if a student has difficulties or has been away for a long while, he can be supported,” said Ms. Mazzo. “If a student is away due to illness or farmer parents who move around, when he comes back to school, he can follow his learning guides where he left off — so students are motivated, self-esteem stays high, and they never repeat grades.”

The Escuela Nueva’s strategy also aims to make education more relevant to the students’ daily lives and those of their families — mapping the area where they live, for example and learning about the agricultural calendar, and the learning and teaching materials direct students to share what they learn in school with their families and communities.

Decades after the model was first developed in 1975, Escuela Nueva has received support — including financial — from the Colombian government, Unesco and The World Bank, and was implemented into a national educational policy in Colombia in the late 1980s. By 1988, Unesco declared that Colombia was the only country in Latin America and the Caribbean where rural schools outperformed urban schools because of the Escuela Nueva method.

Between 2007 and 2009, the program taught 700,000 children in Colombia, and the model is now implemented in 20,000 schools across the country in both rural and poor urban areas. Escuela Nueva has now expanded internationally to 19 countries, including Brazil, the Philippines and India, benefiting more than five million underprivileged children.

Ms. Colbert and the model have won a string of awards over the years, most recently the$500,000 WISE Prize for Education awarded by the World Innovation Summit for Education in Doha, Qatar in October. The prize is an annual award, funded by the Qatar Foundation for Science, Education and Community Development, that recognizes innovative contributions to international education.

“When you see these isolated, invisible schools, why wait for big educational top-down reform from the government?” said Ms. Colbert, while in Doha to receive the prize. “We started the fire from the bottom up, by making small changes in classrooms and working with rural teachers to improve morale, results and resources.”

The method transforms the conventional learning paradigm where the teacher is the only one talking and conveying information in a classroom. The idea is that students are placed in the center of the learning process. While the philosophy is not new, its application in a low-cost way in rural communities by Ms. Colbert’s team is revolutionary.

“Can you imagine a child who leaves and is forced to repeat a grade level every time he comes back?” she said. “Where’s the self-esteem? So we designed learning materials that promote self-paced learning and a flexible schedule, because what we had before in our schools simply wasn’t working.”

“Change won’t take place up in some office, it has to take place right on the ground.”