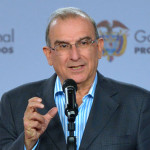 The chief negotiator for the Colombian government praised the achievements that have been reached thus far in ongoing peace talks with the FARC rebel group, in a statement released Wednesday honoring the one-year anniversary of the start of negotiations in Havana.

“Now is the time to put all of our strength into finding peace,” said Chief Negotiator and former Vice-President Humberto de la Calle.

De la Calle focused on the two major agreements reached so far between the FARC and the government, saying that the first, which pertains to agrarian reform, could mean the ”rebirth of the Colombian countryside,” and calling the second, a deal redefining political participation, a ”new opening for democracy.”

“[Political participation] will consolidate the rights of the opposition, deal peacefully with the entry of political movements, open doors to new political parties, generate a culture of tolerance and respect, offering security, and dignify the exercise of politics,” he said.

De la Calle went on to thank the Colombian people for their active participation in the peace talks.

In regards to the FARC, he said, “we hope the FARC share our wish [for peace], and that they permanently renounce the use of violence.”