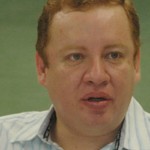 A former mayor of Colombia’s central city of Villavicencio was arrested Wednesday for ordering the assassination of his predecessor.

Colombia’s police confirmed the capture of ex-mayor Franklin Chaparro by using three women that often “frequented” the politician in a secret apartment in Bogota, according to newspaper El Espectador.

Chaparro is being charged with hiring the hitmen who killed his predecessor and once political mentor, Omar Robayo, who served as mayor of Villavicencio from 2001-2003.

The killers were members of one of the most violent blocs of the defunct paramilitary group, the Centauros Bloc of the AUC.

Robayo was killed on February 22, 2004 on a soccer field in their hometown. Three other people were also killed in the attack.

Chaparro will face at least 42 years in prison for the crimes of aggravated homicide and attempted homicide.