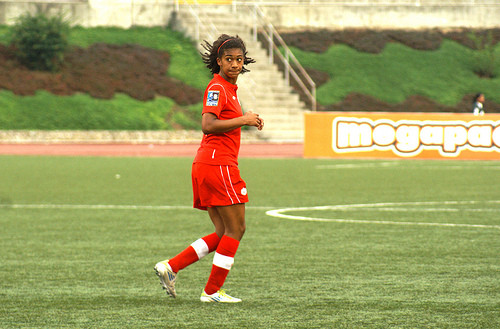 Summer Clarke scored the lone goal and the victory gives Canada four points after two matches in the group phase.

Clarke’s tally came in the 51st minute after she took a pass from Nichelle Prince. Full back Lindsay Agnew had played a straight ball down the right line that Prince chased down and won.

Prince continued her run deep toward the Colombian line before centering a pass for Clarke in the middle. Clarke used her speed to get in front of Colombian defender Anyella Martinez who could only drag down Clarke, but not prevent the goal.

Canada dominated possession in the early part of the match, especially the opening quarter of an hour. Despite breaking through the Colombia defence on several occasions, Canada could not break through for an opening goal.

In the 30th minute, Canada had its best chance of the first half after Clarke beat a pair of defenders and then fed Valérie Sanderson off to the right inside the box. Sanderson didn’t quite have the angle, though, to hit more than the outside netting of the goal.

Coach Bryan Rosenfeld’s Canadians had another great chance in the 61st minute, but this time Nicole Loncar hit the crossbar. Loncar had fired her shot from just outside the Colombian box.

Clarke now has seven goals in seven official FIFA/CONCACAF matches at the U-17 level. She is Canada’s all-time scoring leader in U-17 competitive matches. For her efforts in Tuesday’s match, Clarke was selected as Canada’s player of the match.

Canada’s next opponent will host Azerbaijan on Sept. 29. That match will be broadcast live on CBCSports.ca at 11.00 ET / 08.00 PT (14.00 local from Shafa Stadium in Baku). Live updates of all Canada matches will be available via Canada’s twitter stream @CanadaSoccerEN.

The FIFA U-17 Women’s World Cup Azerbaijan 2012 runs until Oct. 13. The 16-team competition features 32 matches in six stadiums (five in Baku and one in Lankaran).

This marks Canada’s third participation in the FIFA U-17 Women’s World Cup since the biennial tournament was inaugurated in 2008.