TODAY COLOMBIA (Insightcrime.org) Colombia has outlined plans to mitigate surging coca cultivations — one of the biggest threats to lasting peace in the country — as the FARC guerrillas’ demobilization process moves slowly forward.

The Colombian government will aim to eradicate 100,000 hectares of the cocaine-producing plant this year despite only uprooting 17,593 hectares in 2016, according to El Tiempo. (See InSight Crime’s graphic below) 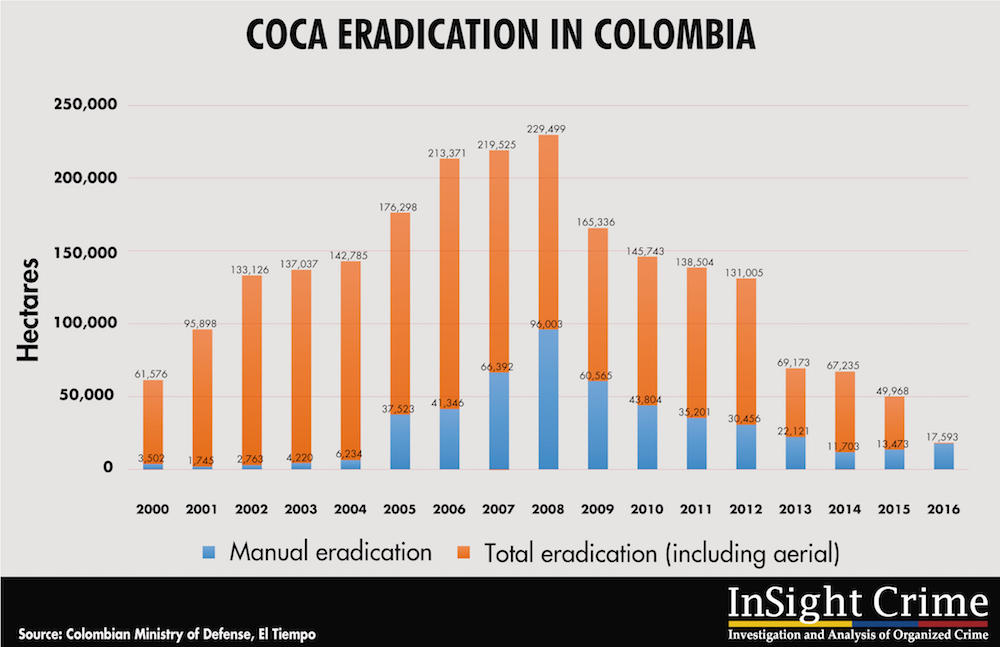 The ambitious goal amounts to more than the 96,000 hectares of coca cultivations believed to be present in Colombia in 2015, based on figures from the United Nations Office on Drugs and Crime (UNODC). Sources consulted by El Tiempo predict that cultivations may have risen to 130,000 hectares in 2016, a figure unseen since a peak of 145,000 hectares in 2001, according to UNODC estimates.

Eradication efforts will be split evenly between the voluntary substitution of coca crops for legal alternatives, and forced eradication by state forces. To carry out the job, the army will reportedly have specialized manual eradication brigades totalling 20,000 troops.

These developments come only weeks after a milestone for the peace process unfolding with the Revolutionary Armed Forces of Colombia (Fuerzas Armadas Revolucionarias de Colombia – FARC), who control the lion’s share of the country’s coca crops.

On December 28, Colombia’s congress approved an Amnesty Law outlined in an agreement signed by the rebel army and the Colombian government. This law is a key requirement in providing judicial guarantees for FARC members who hand over their weapons, but it has been strongly criticized by opposition politicians. When implemented, it will grant pardons for thousands of guerrillas not considered responsible for crimes against humanity, and possible freedom for imprisoned rebels.

There have been some hiccups since the demobilization phase began at the start of December 2016, including delays in readying in the zones where guerrilla fighters will temporarily gather to surrender their weapons and prepare for reintegration into society. Nonetheless, FARC troops are slowly moving to their designated areas.

These ongoing developments show that the wheels are finally in motion for Colombia’s “post-conflict” plans, yet they also draw attention to the biggest obstacles ahead.

The cocaine trade is a huge source of income for dissident FARC members as well as other criminal organizations that are already moving into areas left behind by the demobilizing rebels. And despite Colombia’s surge in coca cultivations, eradication fell sharply last year. This is mainly due to the government’s controversial decision in 2015 to ban the aerial fumigation of coca crops, a method that represented over 80 percent of total eradication the previous year.

Many have opposed this change, including the United States government. It is possible that Colombian officials had their North American allies in mind when setting the 2017 eradication goal; US congressional representatives recently suggested withholding “post-conflict” aid to the country unless significant changes are made to the peace deal. Moreover, US Vice President Joe Biden advised Colombian President Juan Manuel Santos in December 2016 to focus on the fight against drug trafficking in order to maintain good ties with incoming US President Donald Trump.

While it will be difficult for Colombia to achieve its eradication goal, it may have more resources to do so, as former FARC members convicted of grave crimes will be expected to participate in crop substitution efforts.

Another significant challenge will be to provide viable economic alternatives for coca growing communities to secure long-term change. However, there are doubts about the government’s capacity to fill the state void in these areas in the imminent future.