Cali Is The Epicentre Of A Major Revolution In Public Transport 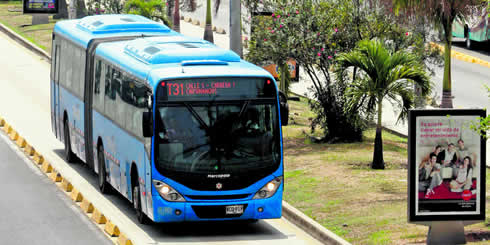 The implementation of the MIO  has sparked protests from small carriers in the capital and has generated chaos.

Cali, Colombia’s third largest city is taking the lead ahead of Bogota and Medellin in eliminating the “busetas” and “colectivos” – the small public transport buses and vans – and only operative a mass transit system.

But the change did not come easy. Cali’s bid to introduce a model mass transit system in the country this week cost its inhabitants three days of rioting and a big transit mess, as small carriers refused to stop circulating before the advance of the MIO.

In Colombia there are seven cities with a mass transit system with high-capacity articulated buses sharing the streets with the busetas and colectivos. But Cali will be the first in the country and the second in Latin America after Santiago de Chile, to go 100% with an integrated mass transit system.

This commitment, unprecedented in the country, sparked riots that resulted in 78 acts of vandalism, left 14 people injured and  vehicles MIO vehicles damaged, requiring the intervention of some  1,400 police officials ad 400 guardas de tránsito (traffic police) to return the calm.

Despite the problems the city remains steadfast in its commitment that by the end of the year to eliminate the minibuses, vans and informal transport and left with only the MIO.

“We are in the transition phase that some thought would never come,” said mayor Rodrigo Guerrero, who with this initiative will bring Cali to the level of any European city with respect to public transport.

The change means that on November 1 the 1,050 units of the “collective service” provided by 12 companies covering 22 routes will see their operation permits cancelled.

On October 1 the cancellation of the permits of 12 companies operating 35 routes triggered the protests.

Some of the operators joined the MIO, while others did not believe that the city would move solely to a mass transit system, that the “traditional” operators would be forced out.

Using an electronic payment system drivers of the MIO do not handle cash. Users can obtain a plastic card at any MIO station and load it with any amount. Cards can also be loaded at a growing number of points of sale along the MIO routes.