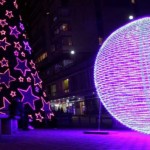 Colombia’s Bogota will temporarily expand stop of one of the main routes of the city’s mass transit system to allow locals and tourist to see the Christmas decorations.

The capital city’s government said that from December 14 to 24, the Transmilenio line B9-H9 will have 16 extra stops where the city government and private sector decorated the city for the holiday season.

The extra bus stops will be included in the bus route between 8PM and 10PM.