TODAY COLOMBIA – Bowling alleys will never seem the same once you’ve been to Colombia and played tejo. Not unless you employ equal amounts of beer and gunpowder.

Here’s how this little-known Colombian sport works: you throw a lump of metal – it looks like a squashed version of what shotputters throw – down what looks like a bowling lane, aiming for a far-off sandpit. If you hit the right spot, bam! 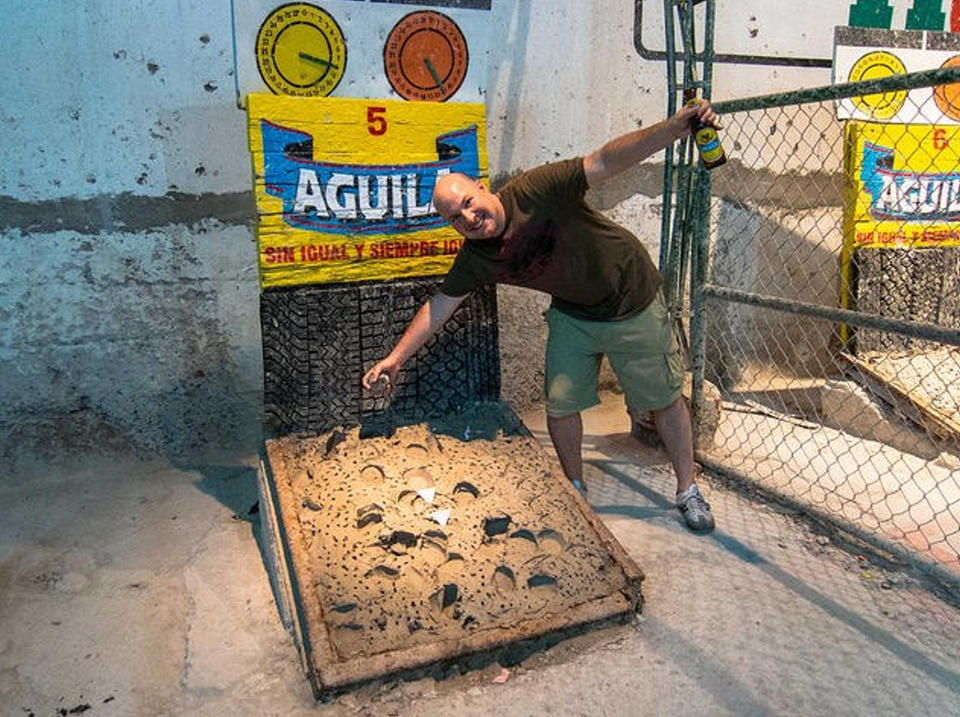 There’s a crackle of explosives, a cheer and a clink of beer bottles.

A bright flash erupts as the force of the palm-sized, 680-gram puck smashes gunpowder against metal.

The garish noise reverberates around the room, bouncing off the concrete walls and sheet metal roof to ensure everyone hears it. 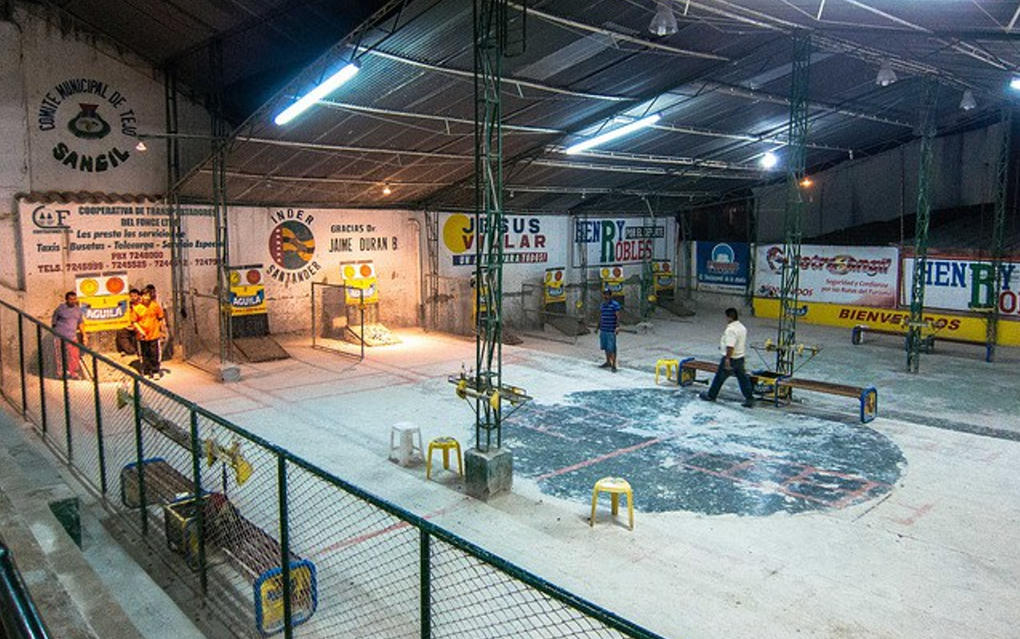 I experienced my first tejo game on a trip to Bogotá, after calling on Andrés Martínez, a musician with electro-cumbia band Monareta, to show me some highlights of his hometown.

It turned out to be one of the best nights I have ever had in an unknown city. We jumped from the gritty tejo courts to hip record bars, via an urban beer garden, basement drinking dens and a wild drag club. I knew then the city had me under its spell. 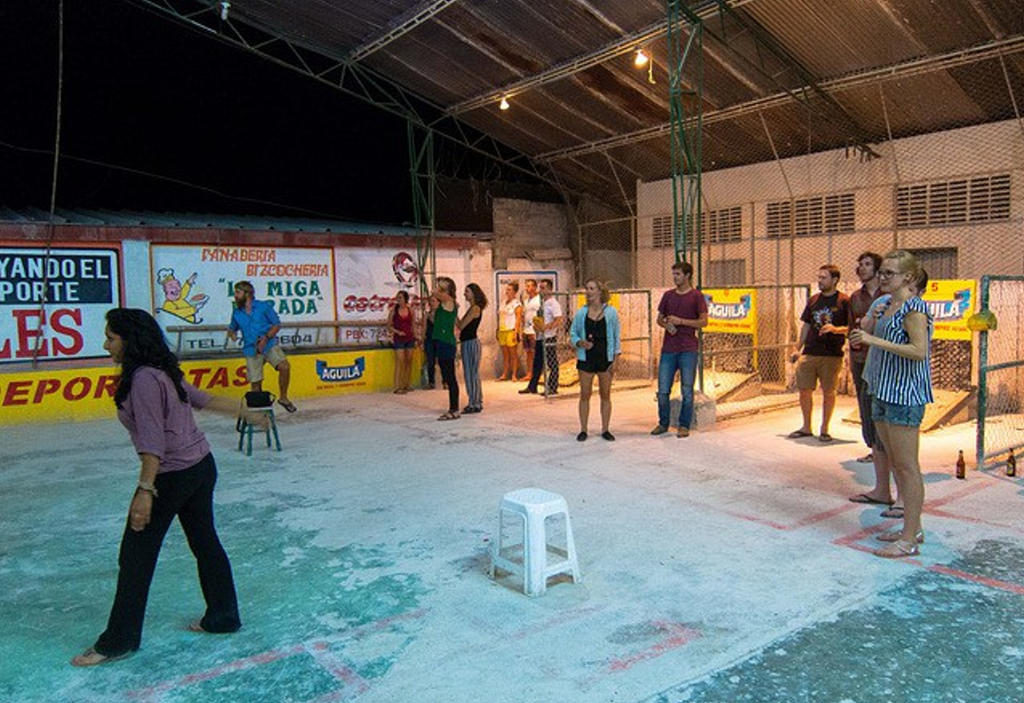 For most foreigners visiting Colombia, Bogotá is typically cast as a supporting actor, rather than the country’s star. It is the capital, transport hub, and a gateway to more exotic destinations: the Caribbean coast, the wilds of the Amazon, picture-perfect Cartagena and balmy Medellín.

Some overseas visitors stay in the capital only for one night.

They tick off the gold museum, take a cable car to enjoy the views from the top of Mount Monserrate, and then move swiftly on.

Perhaps that’s fair enough. Not everyone wants to spend time in a traffic-choked, climatically challenged city of eight million people. And it must be said that, at 2,640 metres above sea level, this Andean metropolis is no stranger to fog and rain.

However, for those who thrive on big cities and cultural highlights, time here is richly rewarded. By day, it’s fun to chain-drink tintos (small black coffees) in cafes around colonial La Candelaria and hipster-friendly Chapinero. By night, the restaurants of Zona G and the bars of Zona Rosa are the prelude to a thorough immersion in one of the coolest music scenes on the continent.

Colombia has been fusing its traditional tropical sounds with cumbia rhythms and electronica for some time now, but, as Andrés told me on my recent return visit, it’s now reaching “boiling point”. Renowned for being receptive and experimental, the capital has become a testing ground for Latin musicians. If you can make your sound work here, it can be a springboard for wider things, even the coveted US market.

RPM Records (Carrera 14 #83-4), a gig venue-cum-record store, is a good place for an induction into the latest bands, as is Armando Records (Calle 85, 14-46), a DJ bar that has proved so popular it is reproduced across town and even has a new palm-dotted outpost in Miami. The original venue is still the best, though. Behind a modest, slightly ramshackle exterior is a multilayered musical labyrinth, capped with buzzing roof terrace.

“The thing I love about the music in Bogotá is the crossovers,” said Pamela Ospina, a Colombian musician who divides her time between the capital and Medellín. She also offered to show me some city hotspots. “There are so many musical influences here – salsa, rock, cumbia – and we’re getting more and more overseas bands coming,” she said.

At the height of the country’s civil war, very few international artists visited; but things have been slowly opening up over the past decade, and the newly signed peace treaty is boosting confidence.

Pamela and I met up in Treffen (Carrera 7, 56-17), a basement bar that’s an explosion of primary colours and has seats made from old train benches. At the weekends it’s so busy that turnstiles filter in the partygoers, but it was quiet early on a weekday, allowing us to talk over the music while sharing a plate of patacones (fried plantain).

Pamela is a creative powerhouse. She grew up in Canada after her parents emigrated, but later returned to Colombia, and now seems to be seizing every opportunity the country can offer: when she is not playing the drums or writing songs, she is a radio host and a stand-up comedian.

Pamela also took me to Hippie (Calle 56, 415), a cosy restaurant that felt like someone’s house, both outside and in. Typical dishes included fish with chontaduro (peach palm fruit) puree, or prawns and mango viche (an unripe version of the fruit that is usually served as a savoury street food). We finished our night at nearby Salvo Patria (Calle 54a, 4-13), another success story which has moved to a bigger location to keep up with demand and, like all good hipster bars, makes its own-label craft beer.

We said our goodbyes on the pavement outside, as it started to drizzle. From T-shirt weather to torrential storms, I had experienced every season that day, in typical Bogotá style. With stand-up comedy on my mind, I thought back to something Billy Connolly once said: “There’s no such thing as bad weather, just the wrong clothing. So get yourself a sexy raincoat and live a little.”

I can’t think of anywhere better to live out that advice than Bogotá.

Article by Vicky Walker first appeared on Theguardian.com; with notes and images from Medellinliving.com