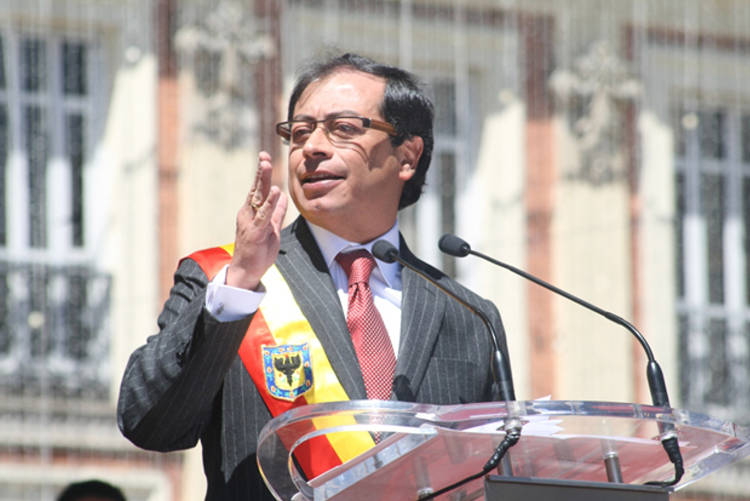 Mayor Gustavo Petro, a leading leftist seen as a potential presidential candidate in next year’s elections, refused to accept the decision by Alejandro Ordonez, an ally of former President Alvaro Uribe, and called supporters into the streets.

“I remain the mayor of Bogota,” Petro, a former M-19 rebel, proclaimed on the municipal TV channel, though legal experts said he must heed Ordonez’s decision if the inspector-general denies the appeal the mayor said he was lodging.

Under the constitution, Ordonez is the last resort.

“We have governed with zero corruption,” Petro told viewers. 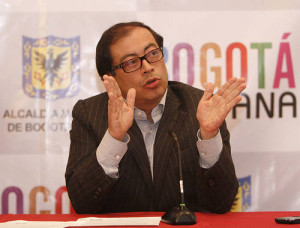 In a subsequent speech to more than 40,000 supporters in Bogota’s central Bolivar Square from city hall’s balcony, Petro accused Ordonez of doing the bidding of Colombia’s extreme right, which has a history of slaughtering leftist politicians and opposes President Juan Manuel Santos’ peace talks in Havana with Colombia’s main rebel group.

Petro, who called his ouster “a coup d’etat” in an earlier tweet, accused Ordonez in his speech of trying to sabotage the Cuba talks.

Ordonez’s office is empowered to investigate and fire public officials and in 2010 he removed prominent leftist politician Piedad Cordoba from the Senate and barred her from political office for 18 years. He ruled at the time that Cordoba, a former close ally of the late Venezuela President Hugo Chavez, aided and promoted the leftist rebel Revolutionary Armed Forces of Colombia.

The inspector-general said he ordered Petro fired for “violating constitutional principles of commercial competition and freedom” by firing garbage collection contractors in December 2012 and replacing them with a city-run service.

Petro’s gambit failed, and the contractors returned to work three days later after thousands of tons of garbage accumulated.

As a senator, Petro’s investigations of the influence of far-right militias in Colombian politics uncovered a scandal in 2006 that has led to criminal conspiracy convictions of dozens of politicians.

The probe made him a national figure, and he finished third in the 2010 presidential election. But his popularity plummeted not long after he took office in 2012 as mayor of the capital, the country’s second most important elected office.

Longtime allies abandoned him, quitting his administration and calling him stubbornly autocratic and unreceptive to criticism as he has sought to place under municipal control services that had previously been privatized.

Petro backed Ordonez’s inspector-general candidacy while in the Senate, leading in part to his split with the country’s main leftist part, the Polo Democratico.

In 2011, another leftist Bogota mayor was dismissed by Ordonez while under investigation for corruption related to alleged construction contract kickbacks. He was imprisoned later that year and is currently on trial.