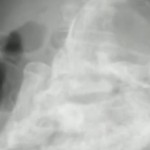 An elderly woman in Bogota was checked into a hospital after reporting a strong headache and diarrhea, leading doctors to discover a 32-week developed fetus from a pregnancy that took place 40 years ago.

“An 82-year-old patient who arrived at emergency services on December 8 with diarrhea and in the medical exam the medic who was looking over (the patient) noted something abnormal in her abdomen and ordered an exam thinking that perhaps it was gallstones. An ultrasound was done and it wasn’t positive. Then, an abdominal radiography was ordered which located a tumour in the abdominal cavity which concluded that it was a fetus in the woman’s abdomen,” said Dr. Kemer Ramirez to local media.

The situation was caused by a rare condition known as lipedion that affects one out of five million pregnancies.

Litopedion is a form of ectopic pregnancy where the fetus doesn’t develop in the uterus but rather in the abdominal. The condition doesn’t show symptoms leaving the mother unaware of the presence of the unborn fetus residing within her for 40 years.

“This happens because the fetus does not develop in the uterus because it has moved to another place. In this case, the abdominal part of the woman is not a viable (place) and this is what happened, a calcified fetus because the body is generating defence mechanisms and it is calcified until it stays there encapsulated,” said Ramirez.

Upon discovering the under developed fetus, doctors decided the best course of action was surgical removal.