At US$2.99 a pop, Colin Post, editor of the Expat Chronicles, talks about talks about sex, violence, crime and drugs in Colombia’s major city, Bogota in his e-book, “Bogota Brothel Tours: A Brief Career in Colombia’s Sex Trade”, available on Amazon. 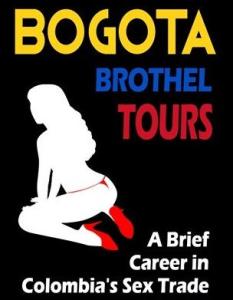 In his Amazon bio, Colin says that after completing his MBA decided against working as a corporate slave, went independent. He moved to South America and launched an independent career. He also started writing, a dream he’d never pursued through His blog, the Expat Chronicles.

To boost sales, Colin is offering 20.000 Colombian pesos (about US$10) of playing money at a Bogota casion and a bottle of Peruvisan Naturals Maca tablets and an entry for a sweepstakes to win a 4 night complimentary stay at a luxury apartment in Medellin.

The free stuff is available to one and all who buy the e-book and write a review.

On his blog, Colin gives this description of his e-book:

The 2012 US Secret Service scandal in Cartagena, in which agents were caught partying with Colombian prostitutes, brought global attention to the sex tourism industry in Colombia and greater Latin America. Just months before that news story, Colin Post had shuttered a guide service for tourists looking to visit the red lights districts of Bogota, Colombia.

This is the story of that business, which brought gringos to ‘zonas de tolerancia’ – designated neighborhoods where prostitution and brothels are legal and tolerated. Those areas can be found in Chicó, Chapinero, and the infamous Santa Fe, each one catering to a different economic level. The story is full of cocaine and putas, of gringos and colombianas, of whoremongers and whorehouses, of strange fetishes and wild times with beer and aguardiente.

The story takes a twist as the Colombian government intimidates Post via the DAS, Colombia’s version of the FBI which has since been closed by President Juan Manuel Santos for corruption. And finally, the book tells the tale of another foreigner with an agency catering to sex tourism, Noah Goldberg of Medellin Paisa Tours, who was assassinated in Medellin shortly after the Cartagena scandal.

The book is a wild ride that gives an inside look into the sinful kinds of fun that can be had in Bogota, Colombia. He also offers a excerpt (in PDF format) at http://www.expat-chronicles.com/wp-content/uploads/2013/02/Bogota-Brothel-Tours-excerpt.pdf

Or  buy the book on Amazon using the following link: