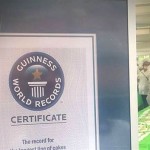 Colombia’s capital Bogota made it the Guinness World Records list after some 180 people baked a 600-meter pound cake, the biggest ever recorded.

Following the successful record attempt, Bogota residents taking part in a local sporting event were given one of the 10,000 pieces of cake.

The successful attempt to bake the world’s biggest ever pound cake was to celebrate the seven-year anniversary of Chilean retailer Falabella in Colombia.