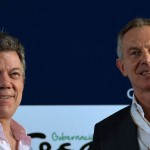 “I pay tribute to your leadership and determination,” Blair told Santos while both were attending a summit for governors in the northern Colombian city of Valledupar.

The former PM, who during his days in office bartered a key agreement in the Northern Ireland peace process, said that “we obtained peace because the people, as a whole, said ‘enough. There must be a better way’, and they were able to leave political issues aside for economic and social improvement,” Blair was quoted as saying by Santos’ website.

“We were successful because their was a coherent unity,” said Blair, adding that “the most difficult in a process like this — in which there has been so much pain and suffering” is asking the victims to forgive their victimizers, reported newspaper El Tiempo.

The former UK prime minister called on Colombia’s leaders to clarify and explain these victims the contents of pacts made with the FARC in order to ” minimize suffering in the future.”

Santos’ peace process with the FARC can count on high levels of skepticism among Colombians, who in polls have expressed to have little confidence in a positive outcome of the talks or the sincerity of the rebels when it comes to achieving peace.

The peace talks began in November last year and in the event of a final peace accord will end a conflict that began in 1964 abnd has cost the lives of at least 220,000 Colombians.

Blair’s visit to Colombia is the second this year; In May, the former British PM visited representatives of the Colombian government after which he also expressed his support for the peace talks.