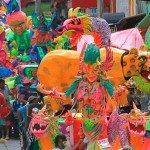 The Carnival of Blacks and Whites bursts back into the streets of Pasto this weekend, as a whirlwind of color, dance, and music, displays the best of southern Colombian culture and tradition.

Declared one of the Masterpieces of the Oral and Intangible Heritage of Humanity by UNESCO, the celebrations officially began on January 2 with an offering to the Virgin de las Mercedes. Locals then showcased their unique heritage in the Colonies Parade (Desfile de las Colonias) — a rich display of the region’s folklore, mythology, legends, gastronomy and music.

The true carnivalesque atmosphere will be ignited on January 3, starting from the youngest participants, as groups of children parade alongside impressively crafted floats in the “Carnavalito.” Adults follow suit the day after as the traditional Castañeda Family procession.

One of the central processions of the Carnival, the parade is named after a colonial family from Antioquia who arrived to the city in 1939 to the cry of “Long live the Castañeda Family!” Since then they have always taken part in this particular display of local customs.

The 5th and 6th mark the Days of the Blacks and of the Whites respectively. The Day of the Blacks is a commemoration of day off given to slaves for their cultural celebrations; nowadays, the entire town “blackens up” in celebration.

The following faces are washed clean and doused in talcum powder and makeup: it’s the Day of the Whites, also characterized by the Magno Parade in which giant, majestic sculptures traverse the city streets in an explosion of music and color.

“The painting game is a caress, social status is unimportant, we are all one,” said Gisela Checa, the manager of Corpocarnaval.

Talcum powder, foam and paint do indeed bring the abundant crowds together: every year, around 300,000 locals and tourists alike flood the colonial capital of Nariño State.

Tuesday will conclude the start-of-year celebrations in Pasto with a typical farmer’s festival, in which the highlight will be the chance to try the region’s unmissable delicacy of roasted guinea pig.

Also known as “Colombia’s Surprise City,” Pasto is located in southwest part of the country, in the Andes mountain range. Its world famous Carnival has brought new life to the city every January since the early 20th century.

Arrival of the Castañeda Family, Parade

Day of the Blacks, Identity Game