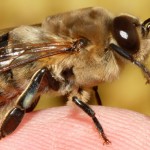 A 75-year-old man was killed by attacking bees while walking with his dog in Colombia’s northern region of Santander, reported local media on Monday.

The elderly man reportedly was taking his dog to hunt when the bee swarm attacked him fiercely.

The bees were reported to belong to the so called Africanized honey bee – commonly referred to as “Killer bees” – which are known for their aggressive, hyper-defensive behavior.

“The man died on the spot by multiple stings. Apparently the barking dog alerted the bees that then attacked the man. He couldn’t run to escape,” said local police to the media.

According to reports, this has been the third death caused by bee attacks this year in the region of Santander.

Africanized honey bees originated in South-East Brazil in the 1960s out of the cross-breed of European and South-African bees and since then have spread throughout the Americas – due to them out-competing the European subspecies and being better adapted to tropical conditions.