Ball is in Colombia’s court regarding airport ‘refugees’: UN 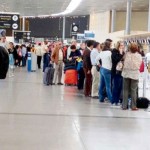 The decision of what to do with six Cuban citizens stranded in a Bogota airport for nearly two weeks will ultimately be left up to Colombia’s government, affirmed the UN Refugee Agency (UNHCR) late Monday.

“[Their fate] will depend on the interpretation that the Colombian Migration Authorities give to [the Cubans],” reported the El Colombiano newspaper.

Since refusing to board their connecting flight from Bogota back to Cuba after being deported from Ecuador, six Cuban citizens have been seeking political asylum in Colombia, so far to limited success.

The Colombian government has been trying to figure out how to handle the situation. As they are reportedly not the subject of ongoing political persecution in Cuba, the Cuban Consul in Colombia has argued that the stranded foreigners do not clearly qualify as refugees or candidates for political asylum.

MORE: Cubans in Bogota airport ‘do not qualify as refugees’

Nonetheless, on Friday the Migration Office of Colombia’s Foreign Ministry granted the six Cubans a safe-conduct starting this Monday, meaning that they will be allowed to file a request for asylum before the Ministry during the following four days.

The UNHCR recognized that the Colombian government is faced with a challenging issue considering how difficult it is to control the “increase of the flow in migration,” especially with the threat of human trafficking.

The UNHCR concluded, however, that the six Cubans do not appear to be under its jurisdiction, meaning that their fate will now rest entirely in the hands of the Colombian government.

While it did not offer any guidance on how to proceed, the international body did assure Colombian officials that other countries are facing similar problems and that the Cuban situation could be a good “opportunity to identify” issues like this in case others come up in the future, according to El Colombiano.

Once a request for asylum has been submitted, Colombia’s Foreign Ministry will evaluate each case according to Decree 2840 before announcing its final decision.