By Loren Moss (Finance Colombia)  “This flight (AV 9328) has been canceled. You cannot come in here. As of January 1, Lifemiles Silver members no longer have access to this lounge. You can purchase a day pass. How would you like to pay?”

This was the greeting on January 24 for the author, a Silver Elite holder and Lifemiles member since 2008.

Avianca’s website (shown above, click on the headline image to enlarge) clearly states the longstanding policy that has been in place, that as of January 25, 2020, states: “If you are a LifeMiles Gold or Silver member, you can access the Gold lounge.” Nevertheless, the struggling airline is turning away its own most loyal customers 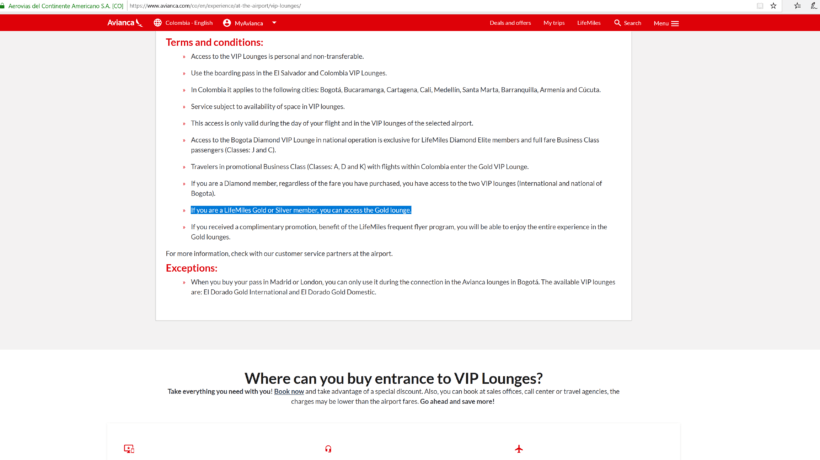 At a time when new airlines are entering the Colombian market at an unprecedented pace and competitor LATAM has a new alliance with Delta Airlines giving passengers more options in and out of Colombia than at any time in history, is this going to save the airline? Is it going to pay off the US$375 million in additional debt that Avianca has taken on since defaulting on its borrowing?

Avianca is already under investigation and facing a potential COP49 million Colombia peso fine by Colombia’s Superintendencia de Transporte, or transportation regulatory authority for systematic noncompliance of passenger itineraries and violation of passengers’ contract of carriage.

The once-admired airline has been embroiled in scandal that has seen people jailed, labor unrest, mismanagement and drama in recent years. Since former chairman Germán Efromovich lost control last year, Avianca’s control fell into the hands of US based United Airlines, itself infamous for breaking guitars, baiting and switching its own frequent flyers, killing bunnies, and having doctors dragged off airlines to give his seat to someone else.

Now, with a new CEO, is this part of Avianca’s new strategy for success? It isn’t mentioned in Avianca’s “plan 2021” that is supposed to “strengthen the company’s competitiveness…” No press releases regarding the sudden stinginess were issued to alert passengers, and the above photo shows the policy as listed on the company website on January 25, 2020.

Avianca has not had to compete on price in the past, but on their route structure and their domestic lounges: workspaces for business travelers in Colombia’s airports. (A decade ago, they even competed on passenger experience!) Their lounges outside of Bogotá are not impressive by any standards but provide a secure workspace for business travelers. Commuters and day-travelers on business between Colombian cities typically don’t check luggage so the checked baggage allowance isn’t so important as a place to charge a phone, pull out a laptop, and catch up on work.

There are silver lounges in places like Medellín’s José Maria Córdova airport, but those do no good. It’s when one is stuck in Bogotá with Avianca’s frequent canceled flight (like the journalist’s Flight 9328 on January 24). The airline has a dismal 2 star rating (out of 5) for on-time performance so travelers are likely to be stuck a while in the hub airport; Bogotá’s El Dorado International. This in contrast to Viva Air’s #1 on-time performance and Copa’s 5 star rating for on-time performance. After a canceled flight, at least frequent travelers could wait in the lounge. After all, travelers would rather get home on time than sit in a lounge because their flight has been delayed or canceled. In such cases, the lounge is not a perk but a consolation.

After writing this glowing review in 2016 calling Avianca “my preferred Airline,” a lot can change in 4 years. For the past 3 years, I would book directly on Avianca’s “Programa Preferencia” corporate website, meaning more profit for the airline by not sharing the commission with aggregators such as Expedia, not even checking competitive carriers, and always purchasing the more expensive fare classes, never the “promotional fares.” I would imagine, the definition of an ideal passenger.

But now, is there any reason to continue flying Avianca? This editor is having trouble thinking of any. I’ll be spending down my accumulated miles, but it’s time to try out some of these new, better performing contenders, now that we have choices.