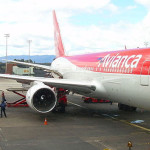 Owner of the Avianca Holding SA, German Efromivich said before the debut at the NYSE, the float will hopefully “give more visibility to the company and will make it easier to obtain loans and financing in more favorable conditions.”

“We are very proud about Avianca’s Wall Street debut. The target of this capitalization will be to proceed with the process of modernization and expansion including the acquisition of the most advanced aeronautical technology – like new aircraft among other projects. This also confirms the confidence of the international investor community in the strength and value of the company,” told Avianca’s president Fabio Villegas Ramirez to the press at the  NYSE trading floor.

Avianca’s recent phoenix-like history is closely related to the personality of its chairman – the Bolivian-born German Efromivich – and Colombian history.

Even though Avianca is one of the oldest Airlines of the region – tracing its roots back in the 1920s – it has been struggling especially in the 1990s which was one of Colombia’s most violent periods.

For example in 1989 Avianca was affected by the bombing of one of its planes leaving 107 dead – planned by Colombian mafia boss Pablo Escobar aiming at presidential candidate who wasn’t even on board.

Another blow was an Avianca plane crash in New York in 1990, killing 73.

In 2004 Avianca was practically bankrupt when Efromovich put down $64 million in cash and took on $220 million in debt to take over the company.

Since then Avianca has profited from economic growth in Colombia creating a new, traveling middle class that can afford destinations like the U.S. and Europe.

It further expanded through a merger with Central American airline Taca in 2010 making Avianca a serious competitor in the regional market next to rivals like Chilean airline LAN or Copa Airlines Inc. from Panama.

Beside these recent success stories the company still has to deal with problems like the risk of currency fluctuations or the small size of their domestic airport Bogota which has been causing severe complications in the past.

The man responsible for Avianca’s rise of a phoenix in the last decade –  German Efromivich – is a son of Polish immigrants in Bolivia who has a made a fortune on the oil fields in Brazil after starting out selling books from door-to-door.

He is now the owner of a business empire that spans nearly all of South America in areas such as oil services, agriculture, hotels, shipbuilding, power plants and Avianca.