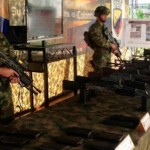 They explosives were found in a hideout in a rural area of El Pato in the state of Valle del Cauca. Soldiers of the High Mountain Battalion confiscated 43 five-gallon barrels with ANFO explosives, four mortar shells and a 60 mm caliber craft.

Military told the radio that the explosives weighed 934 kilos, but did not provide more information.

The Third Brigade, linked to the High Mountain Battalion, has seized 1,200 kilos of ANFO over the last seven days.

According to the army,  the explosives belonged to the FARC and added to the 200 kilos found in the northern Cauca neighborhood.