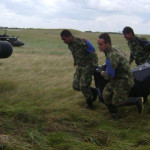 Colombia’s armed forces killed 10 ELN guerrillas and injured another two in an offensive in the northeast of the country, authorities said Sunday.

According to an army press release, a joint operation by the Army, Navy and Air Force in the municipality of Tame, Arauca resulted in the combat kills and arrest.

Following the combat, the army also said to have found arms, explosives and army outfits.

The Domingo Lain Saenz is one of the ELN units active in Arauca, a hotbed of guerrilla activity on the Venezuelan border and allegedly involved in ongoing attacks on the oil and mining industry in the area.

The ELN is Colombia’s second-largest rebel group with an estimated military force between 2,000 and 3,000 fighters.

The group has asked the government to take part in peace talks currently held with the FARC — the largest guerrilla organization in the country, but has so far not reached agreement with the government over taking part in a possible peace process.

President Juan Manuel Santos said in a tweet that offensives against guerrillas continue until a peace accord is reached.