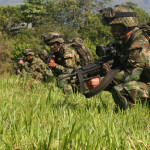 The Colombian army on Wednesday claimed to have confiscated a list of politicians and other notables that rebel group FARC is planning to either kill or kidnap.

The alleged list was found after the bombing of a FARC camp in a rural part of the central-south state of Huila bordering Caqueta.

The army did not reveal the names of the individuals on the alleged list found by ground forces after the offensive on the camp that according to the army was able to give shelter to more than 100 fighters. Some local media reported the camp as big enough to shelter 300 guerrillas.

During the combat, four soldiers were injured and an undisclosed numbers of rebel fighters were killed, the military said.

The attack came one day after revelations of an alleged FARC plot to assassinate former President Alvaro Uribe and Prosecutor General Eduardo Montealegre.

The alleged assassination plots on Uribe and Colombia’s top prosecutor were attributed to the FARC’s Teofilo Forero Mobile Column, who were also alleged to have constructed the attacked camp.

Colombian President Juan Manuel Santos in October announced an offensive in the south and east of the country to attack FARC units like the Teofilo Moreno column.

The unit is held responsible for some of the guerrilla groups most bloody attacks, while it’s leader “El Paisa” is wanted by authorities for his alleged involvement in a number of terrorist attacks and attacks on armed forces.

Santos’ announced offensive earlier led the army to claim it had found a video of “El Paisa” which turned out to be in the hands of the military for at least two years.