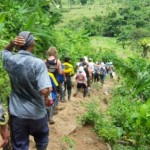 The peace community of San Jose de Apartado considered the official apology by Colombia’s President Juan Manuel Santos on Tuesday as the first steps to restore a relationship of trust between the community and the state.

A representative of the peace community told Colombia Reports that while they recognized the president’s gesture, his words must now be backed up by actions.

Santos formally apologized to the community earlier this week, recognizing that the battered community in northern Colombia had been unjustly stigmatized by the state.

“While this is a gesture of goodwill by the president, the most important thing now is that his words are followed by concrete action and that from now on the government and its institutions will stop stigmatizing our peace community,” said spokesman Arley Tuberquia.

The president had been obligated to apologize by the Constitutional Court over comments made by his predecessor, former President Alvaro Uribe, who had accused members of the peace community in 2005 of obstructing  justice.

According to the spokesman, the president’s apology was one of four conditions to restore a relationship of trust between the peace community and the government, leaving three demands to be met.

The three other demands are as followed:

Residents of the community in the Antioquia state declared themselves a neutral “peace community” in 1997 in an attempt to resist being drawn into Colombia’s armed conflict.

The community was placed under the protection of the Inter-American Commission on Human Rights and has been defiantly trying to stay on their land despite ongoing battles between security forces, guerrillas, and paramilitary forces for the past 16 years.