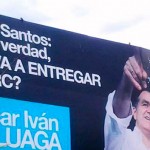 Less than 10 days after Zuluaga became the presidential candidate for the conservative ‘Uribe Centro Democratico’ party, a series of billboards supporting the presidential hopeful and opposing ongoing peace talks with the rebel group, FARC, have appeared.

These signs come after the National Electoral Council explicitly stated that no political propaganda is allowed by any party in the form of billboards or posters, until after January 9.

While the billboards do not explicitly say anything related to the elections, they do include very heated political content concerning the peace talks with the FARC.

One of the signs posted on a road leading into the city of Medellin reads, “President Santos, Tell us the truth. What are you going to hand over to the FARC?” with a large “Oscar Ivan Zuluaga” on the bottom.

There are apparently multiple billboards in various states already as well.

“This is a billboard of opinion, not political proselytization. No one is invited to vote there.  There are no badges of the party there,” said Zuluaga when questioned about the signs.

There has been no word yet is Zuluaga will be punished by the electoral council.