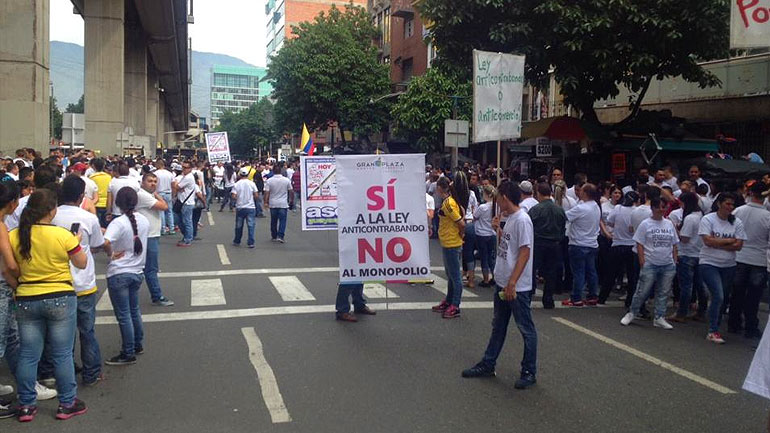 Less than 24 hours after Colombia’s congress approved an anti-contraband law, tens of thousands of shop owners and employees took to the streets claiming the law seeks to monopolize imports and hurt small and medium-size retailers.

The law that was approved on Tuesday seeks stronger penalties for those who sell contraband or pirate merchandise, with penalties up to 16 years in prison.

“The philosophy of the anti-contraband law is to really combat the criminal contraband trader and facilitate the livelihood of those selling merchandise,” Santiago Rojas of Colombia’s tax office DIAN told Caracol Radio.

Also President Juan Manuel Santos and Finance Minister Mauricio Cardenas jumped in to defend the law, claiming the new law “is not against the small business owner. This is against people who sell contraband.”

However, the approval of the law enraged tens of thousands of shop owners across Colombia who depend on contraband or pirate merchandise that, in spite of being illegal, provides poor and lower-class Colombians with products like shoes and clothing that would not be affordable for them without piracy.

Moreover, they claim the law leaves the right to import goods to a handful of monopolists.

Consequently, four million shopkeepers across the country will be barred from importing merchandise, according to retail federation Fesacol.

Major protests were reported in the capital Bogota, in mayor cities like Medellin and Cali, and in the Venezuelan border city of Cucuta where approximately 40% of merchandise sold on the market reportedly is either contraband or imported from the neighboring Venezuela where prices are much lower than in Colombia.

Cali protesters said the law will result in “the persecution of shop owners, not allowing them to work.”

The federation of small retailers even went as far as claiming it is leaving Colombia’s trade “in the hands of monopolists,” reported newspaper El Pais.

“It’s not that we’re against the anti-contraband law. What we want is equal conditions for everyone. In this country there exist no equal conditions to import. It’s important the country knows that only multinationals are allowed to do this,” a protester from Bogota told Caracol Radio.

A Medellin trade representative told local newspaper El Colombiano that “we support the increase in penalties and sanctions for contraband-related crimes, tax evasion and money laundering, but we were hoping since 2013 when they proposed the bill to participate” in the creation of the legislation “to demand of the government the dismantling of administrative barriers that impede small and medium-sized business from important merchandise for their businesses.”

The representative said that 70% of merchandise sold in Medellin’s downtown district is imported, leaving the shop owners without the possibility to import merchandise and forcing them to buy their products from one of few legal international traders.

“We reject this favoritism for monopolist importers,” he said.

The massive protests shut down economic activity in the centers of Bogota, Medellin, Cali, Bucaramanga, Villavicencio and Cucuta.