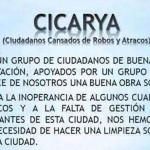 An unknown group claimed to have taken justice in their own hands, distributing a flyer in social media platforms announcing to carry out “social cleansing” acts against criminals in Colombia’s second largest town of Medellin, national media reported on Thursday.

The pamphlet occurred in several social media platforms on Wednesday, announcing “social cleansing” acts against criminals committing thefts and robberies in Medellin. The flyer was signed by a yet unknown group calling themselves “Citizens tired of Crime” (“Cicarya”).

Security expert Heidy Gomez from the University of Antioquia told Colombia Reports that incidents like this are worrying, because the claim of carrying out “justified acts of force on behalf of ‘good citizens’” would undermine democracy because they threaten the state’s jurisdiction over the use of deadly force.

“Furthermore acts like this are promoting the proliferation of violence in a city where already violence is considered almost the only alternative for resolving conflicts, a condition that has negatively affected the development of Colombia’s society on local and national level,” the security expert said.

The authors of the flyer claimed to be “citizens of honor and good reputation who are supported by an armed group,” as quoted in their pamphlet. They claimed that they see themselves forced to carry out “social cleansing” in the city due to the “inactivity and mismanagement of police and city authorities.”

Addressing all criminals active in Medellin, the group threatened them saying that they are armed and ready to “eradicate criminal activities in Medellin once and for all.” Additionally they claimed to already have killed two criminals who they got their hands on before the police did.

According to Caracaol Radio, Medellin’s secretary of security rejected the creation of groups like that, stating that this kind of self-defense groups just develop into another kind of delinquency, also he confirmed that city authorities and police would be investigating the case to determine the persons behind the pamphlet.

The city’s former peace advisor, Luis Guillermo Pardo, claimed that creations of groups like that are due to the “lack of public authority in the city and the rise of street crime and insecurity.”

He also reminded that the rising insecurity provoking reactions like that could “create a paramilitary ideology which has already caused so many bad experiences in this city.”

“It is irresponsible that death should be answered with death, we have to respect the value of life! We are calling on the authorities and citizens alike, not to fall back on ‘private justive’ because it will end bad,” the former advisor was quoted in local newspaper El Mundo on Friday.

Colombia’s second largest city of Medellin unfortunately has a long tradition of armed groups from different political orientations claiming to legitimately carry out “social cleansing” in their turfs.

This tradition started with local self-defense groups in Medellin’s crime ridden poor neighborhoods in the 1970s. Then right-wing paramilitary groups and left-wing militias adopted the strategy throughout the armed conflict of the 1980s and 1990s in order to substitute the state’s authority in the city’s areas suffering from a lack of public security and order.

Just about two months ago the neo-paramilitary group “Los Urabeños” distributed a flyer in one of the poor neighborhoods of Medellin, claiming responsibility for a 26% drop in homicides in 2013.