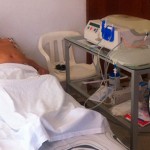 A truck driver in Colombia’s guerrilla-ridden state of Caqueta, Dario Polania, has spent the last 10 years trying to convince authorities that he is not, contrary to accusations, a major front man for the FARC — Colombia’s largest rebel group.

Practically bed-ridden and barely able to move parts of his body due to osteoarthritis, it’s hard to believe that the pitiful sight of this crippled 78–year-old man is a suspected front man for the now deceased Víctor Suarez, alias Mono Jojoy, top military commander and one of the FARC’s most notoriously radical rebels. Nonetheless, for more than a decade now him and his 68-year-old wife, who takes care of him, have fought to convince the state of their innocence.

On October 16, 2003 both him and his wife, Luz Cecilia Espinoza, were arrested for involvement with the FARC. Detained in Combita prison, Polonia discovered through a press conference organized by the Attorney General’s Office that he was behind bars for being the main front man to the commander of the FARC’s Eastern block, Mono Jojoy.

To the bewilderment of him and his family, while his wife was freed after three months without any charges, Polania’s property was to be seized, and he was to endure three more years in captivity, struggling to defend his name from court to court.

The story he told was one of a hard-earned living in an inhospitable land ruled by the FARC, where doing business meant going through the guerrilla first.

After arriving to San Vicente del Caguan in 1974, Polania worked for six years as a truck driver in order to save up the money needed to buy a 405-hectare plot of land for his family in 1984.

With the demilitarization of Caguan in 1988, Polania and his wife opened up an inn near San Vicente, an enterprise which made them known and recognized to politicians, journalists, and whoever else was passing through the area, which was a necessary stop corridor to guerrilla-held zones.

“We all had to go to the guerrilla. People forget that they were the ones in power at the time in Caguan,” Polonia explained in conversation with Semana.

The day of Polania’s undoing occurred when a picture appeared in the media showing him together the FARC commanders Mono Jojoy.

“I was marked for life,” Polania remembered.

“I was talking to him because the guerrilla had taken my 14-year-old son by force,” Polania continued. “After holding him for a year, Jojoy agreed to release him in return for a payment of 10 million pesos (US$5,160).”

Despite Polania’s defense, which included documents proving the legitimate origin of his properties, the elderly man was only released in 2006, and not for very long.

“Demanding my rights was another error,” Polania said. “Because of this the nightmare began once more.”

When, half way through last year, the Army and the Attorney General’s Office announced that a huge amount of FARC-owned territory had been seized, Polania and his wife once more figured as the owners of an extensive 56,000 hectare plot of land.

Polania recounted that a demobilized FARC combatant approached him demanding 50 million pesos (US$25,800) for him to not testify against him in court, while the public prosecutor who had put him behind bars on the first occasion and against whom he had filed a lawsuit was at the time working in a different unit.

“I didn’t consent to the blackmailing,” Polania told Semana. “On this basis, this public prosecutor who is now working for the Attorney General’s Justice and Peace Unit set up a new criminal proceeding.”

Colombia’s justice system has yet to find enough evidence to prove that Polonia and his wife are in fact the trustees of the alleged thousands of hectares of land. After years, his case remains in the pretrial stages.

There is an existing mandate from a judge to return the confiscated land and trucks to Polonia and his family, although the order remains incomplete.

The elderly man, who will be under care for the rest of his life, is tired of the trials he has been submitted to for more than a decade, confused as to why the state is working so tirelessly to incriminate him, as he fights both to survive and, inexplicably, to clear his tarnished name.