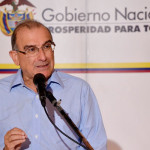 The chief negotiator of the Colombian government’s delegation on Wednesday rejected an alleged FARC plot to assassinate former President Alvaro Uribe and the country’s chief prosecutor, saying that if true the alleged plans could end ongoing peace talks with the guerrillas.

Negotiating chief Humberto de la Calle was reacting to a recently discovered plot of the FARC allegedly planning to kill Uribe, an out-spoken opponent of the peace talks, calling this assumption “absolutely unacceptable.”

“An attack of this nature would destroy the viability of the process. This means, that as we have been talking about tolerance, guarantees and pluralism in Havana, we mean it! The FARC has to offer guaranties of non-aggression and non-stigmatization,” said the chief negotiator.

De la Calle stressed that throughout the negotiations the government has acted responsibly by providing full transparency concerning their intentions, and now expects the same behavior from the FARC.

“Make these kinds of threats disappear from the face of Colombia,” would be exactly the goal of the peace talks that have been going on for almost a year now, said the government’s representative.

The alleged plot is delicate, given that the government and the rebel group have not agreed upon a ceasefire during the negotiations — meaning that both continue to carry out military operations and attacks.