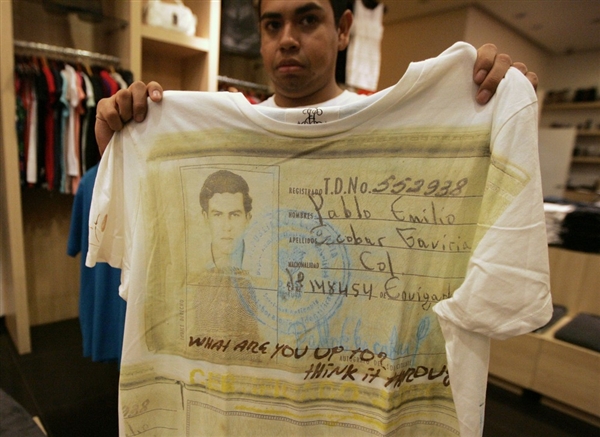 Nearly two decades after Colombian cocaine kingpin Pablo Escobar died in a hail of bullets, his eldest son is conquering new markets in Mexico — with a fashion line in his father’s image.

Sebastian Marroquin’s designer T-shirts, plastered with photos of Escobar, are hot sellers in Mexican states that are on the front lines of the country’s deadly drug war.

The shirts are emblazoned with images of the Medellin cartel boss, who flooded the world with cocaine before he was shot dead in 1993.

Featuring pictures from Escobar’s student ID card, driver’s license and other images, the shirts cost between $65 and $95 — a small fortune in a country where about half of the population lives in poverty.

“We’re not trying to make an apology for drug trafficking, to glamorize it in the way that the media does,” said Marroquin, 39, who was born Juan Pablo Escobar Henao, but changed his name to avoid reprisals after his father’s death.

‘What’s your future looking like?‘
The shirts carry messages to provoke reflection but there were claims they reinforce the fascination with drug cartel culture in Mexico and the region.

One bearing Escobar’s student card reads: “What’s your future looking like?” while a design emblazoned with his driver’s license warns: “Nice pace, but wrong way.”

Marroquin was the subject of a film, called “Sins of My Father,” that told the story of Escobar through his eyes. It also chronicled how he contacted the sons of his father’s most prominent murder victims, Colombia’s former Minister of Justice Rodrigo Lara Bonilla and liberal politician Luis Carlos Galan.

In a posting on the website of U.K.-based charity the Forgiveness Project, Marroquin wrote that “each time I had the opportunity to get close to an enemy or a victim of my father I felt the moral obligation to ask for their forgiveness for the harm my father had caused them.”

“It wasn’t because I felt responsible, but because I felt a duty to support these families in their grief and wanted also the opportunity to tell them my own personal story,” he added.

The cotton shirts, which went on sale last year in Mexico, are selling well in stores in Culiacan, the capital of western Sinaloa state, which is home of Mexico’s most wanted trafficker, Sinaloa cartel chief Joaquin “Shorty” Guzman.

The clothing is also on sale in Guadalajara in western Jalisco state, long a refuge for drug traffickers, which has been swept up in Mexico’s raging drug violence. About 60,000 lives have been lost in the last six years.

An analyst warned that the increasingly popular “Escobar Henao” clothing line simply reinforces an already widespread fascination with the symbols of cartel culture such as marijuana leaves and AK-47s among youngsters in Mexico.

“I see it as a strong symbolic product,” said Vicente Sanchez, a researcher at Mexico’s Colegio de la Frontera Norte. “The state … has to have a better grasp of things directed at young people, as that’s the way that these anti-values gain ground.”