The epicentre was located in Isnos, in the department  (province/state) of Huila. The quake was felt at 11:30am local time Colombia (one our behind Miami time).

According to the El Pais, Cali’s major newspaper, the ground shook for 50 seconds and was felt in Cali and a number of regions in Colombia’s southwest.

The Cuerpo de Bomberos de Cali (fire department) reported no emergencies, though reports of problems with telecommunication were reported in the city and the region. The major problem was an overloading of circuits and cellular networks as family and friends called on loved ones.

The alert went out in the regions of Huila, Caldas, Quindio, Risarlada, Nariño, Santandr, Antioquia (Medellin), Chocó, Cundinamarca and Tolima.

Carlos Iván Márquez, director Nacional de Gestión de Riesgo, ruled out any possibility of a tsunami, but said officials will be vigilant. 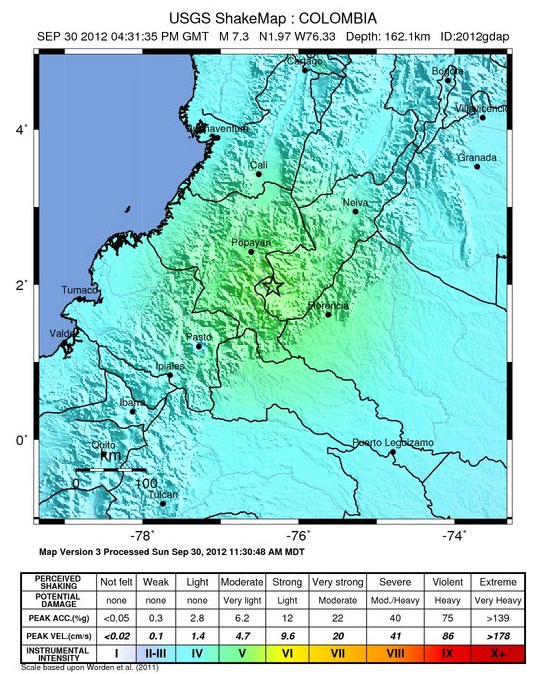 The USGS reports that the quake occurred as a result of normal faulting deep within the subducting Nazca slab. The earthquake ruptured a fault in the interior of the inclined subduction zone that dips to the east-northeast beneath South America, having begun its decent into the mantle at the South America trench offshore of Colombia and Ecuador.

The event resulted from stresses generated by the slow distortion of the subducting plate as it descends through the mantle, rather than on the thrust interface that constitutes the boundary between the Nazca and overlying South America plates; the latter is active only near the Earth’s surface, while the subducting Nazca plate generates intraplate earthquakes to depths of 200 km or more in this region. At the latitude of this event, the Nazca plate moves east-northeast with respect to the South America plate at a rate of approximately 60 mm/yr.