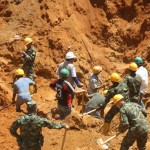 Two more children have been confirmed to be among five people killed in the north of Colombia after a landslide buried a home on Thursday, say local authorities.

The bodies of Nebardo Hernandez, 29, his wife, 26, and one of his sons were already been uncovered early Friday as recovery efforts continue in the wake of the disaster.

Two more of the Hernandez children, both under the age of five, had still been missing after a torrential downpour on Thursday night caused a landslide in Santo Domingo, a town in the northeastern Antioquia state.

They are now confirmed among the dead by local authorities.

Mayor Fabio Ignacio Mira said that relatives found the family home buried in rubble and raised the alarm at 3AM Friday. Search and rescue efforts began at 5AM.

Local authorities say they will continue to search until they locate the missing children. So far, no other deaths or disappearances have been reported.

Landslides like this are common in Colombia, particularly during rainy season.

Earlier in the year, a landslide on a highway in the south of Colombia killed at least six people.