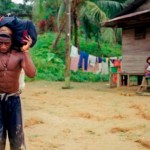 At least 45 families have been forcibly displaced in the western Colombian state of Choco after landmines were buried throughout their communities, according to the Colombian Campaign Against Mines (CCCM) NGO.

An unspecified number of mines were reportedly installed in the Alto Baudo municipality after a series of skirmishes between guerrillas from the ELN rebel group, the country’s second largest, and the self-titled Los Gaitanistas paramilitary front in November and December of 2013. The NGO statement did not specify which group was responsible for planting the landmines, or if both were involved.

The denunciation came from municipal spokesman Havier Mosquera Mosquera, who asked that the families be placed on official lists of displacement victims for 2013.

Mosquera also joined the CCCM in urging “the competent authorities to attend to the region as quickly as possible and take the necessary measures to guarantee the security and the effective enjoyment of rights of the people who inhabit these communities.”

Many of the victims were reportedly second-time victims of displacement, initially being forced to leave their homes in 2001 by the Heroic Pacific Block of the United Autodefense Forces of Colombia (AUC), the now-defunct paramilitary umbrella organization that has since given rise to various neoparamilitary groups throughout the country.

Colombia is one of 161 countries worldwide where the use of landmines has been deemed a human rights violations. Buried explosives, however, are still a favored weapon of various illegal armed groups, which use the mines to screen their movements and disrupt patrols.

According to a report released by the Presidential Program for Integrative Action Against Landmines in 2013, there have been more than 40,000 “incidents” involving landmines since 1990 with more than 10,000 people falling victims to the devices.

MORE: Report breaks down 23 years of landmines in Colombia

Of those victims, a reported 20% lost their lives, and 39% were civilians.

In addition to government and NGO neutralization and education efforts, solutions geared specifically toward landmines are also arising from the private sector. Recently a Bogota-based firm discussed with Colombia Reports its design for a shoe insert that alerts the wearer to the presence of landmines.