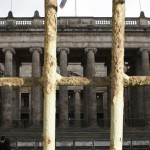 Colombia’s Supreme Court said it has convicted 45 congressmen and 7 governors for connections to paramilitary organizations since investigations into an ongoing “parapolitics” scandal broke in 2006.

The hunt for parapolitics in Colombia’s congress began in 2005 after Vicente Castaño, a late leader of the AUC, bragged to magazine Semana, “paramilitary groups count more than 35 percent of the Congress as friends.”

This pronouncement opened a public debate over paramilitary politics.

Following the 2006 confiscation of a computer belonging to demobilized paramilitary warlord “Jorge 40,″ widespread investigations into the paramilitary involvement were initiated in Congress and public society, implicating over 11,000 Colombians and reaching as far as former President Alvaro Uribe.

Uribe has faced accusations of ties to the Medellin Cartel and AUC for years before becoming president of Colombia, but has so far avoided formal charges. A number of Uribe’s close former associates, political allies and even family members have been convicted for ties to the AUC.