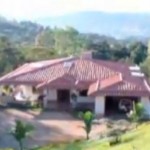 Colombian police have discovered 6,000 million pesos (US$4.1 million) in the home of  Dario Antonio Usaga, alias Otoniel, the fugitive leader of the country’ most prominent neo-paramilitary and drug trafficking organization the Urabeños.

The drug money was found stashed in buried milk cans by the swimming pool in the luxury estate in Necocli, northern Antioquia, belonging to Otoniel – the only surviving brother of the Usuba family clan and apparently the only leader of the criminal organization currently at large.

The millions are reportedly the fruit of drug trafficking, street level trade, illegal mining and the trading of land forcefully confiscated from local farmers.

Two thousand million pesos (US$1 million) and US$15,000 were also found hidden in furniture in various Medellin apartments.

The five-week long clamp down on the Urabeños group, which has since 2009 been commanded by the Usuga brothers clan, has resulted in a severe blow to the structure of the criminal organization, specifically regarding finance and weapons.

During the operation, which spanned seven municipalities of Antioquia State’s Uraba sub region, 22 people were arrested, including Otoniel’s sister Nini Johana Usuga. According to the police, she was stashing money in her brother’s properties to organize payment to other criminal organizations they had dealings with.

Of those detained, five were high-ranking Urabeños members involved in the laundering of assets, contract killings and the distribution of tons of cocaine destined for Mexican cartels.

The cousin of Otoniel, Arley Usaga, alias 07, who was in charge of the trafficking of drugs to Central America, was among those arrested.

The offensive on the criminal group saw the destruction of seven clandestine runways, the immobilization of two planes and 37 Goa speedboats in the ports of Puerto Antioquia, Necocli and Turbo. Seven backhoes used for illegal excavation in gold mines and various decommissioned firearms were also seized.